Beijing Design Week 2014: design studio Lava has created a set of symbols that take elements from both Chinese characters and Western graphics in the hope that they will be understood by people from both cultures (+ slideshow).

Lava's In a Simplified World system is designed to be used on signage around Beijing's ancient hutong neighbourhoods, where the demographic of residents is increasingly diversifying. 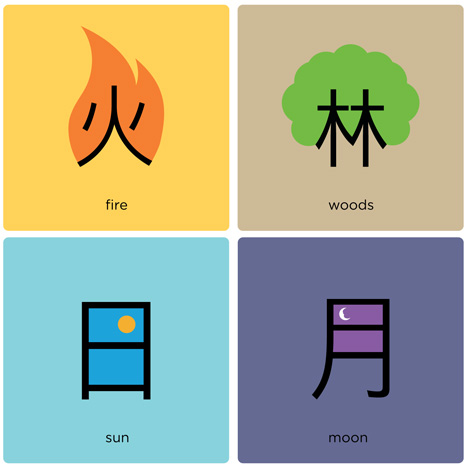 Signs around Beijing are often written in combinations of Chinese, English and pinyin – Chinese written in the Latin alphabet.

The studio hopes that the new symbols could eradicate the need for this, reducing the size of intrusive placards and billboards.

Designers at Lava's Beijing office researched the origins of Chinese characters, many of which are pictograms derived from images of what they exemplify.

"We started by looking at the traditional Chinese characters, how they build up," Céline Lamée from Lava told Dezeen. "Then we looked at how symbols are used differently in the west and the east."

They used this research to adapt and combine the characters with symbols commonly found on Western signage.

The result is a series of minimal pictures that all follow a consistent style, aiming to make them easier for people from all around the world to recognise.

"We want them to be as universal as possible," said Lamée. "Some are really clear, while others are more abstract."

Some of the new symbols are taken from international popular culture, like derivations of cartoons Hello Kitty to signify a cat and Miffy to represent a rabbit.

The team at Lava are currently experimenting with their writing, placing the signs around the hutongs on pieces of fabrics or as chalk drawings on the floor, and awaiting feedback from the residents.

"We put them on seats and walls, painting them with water so they're temporary," Lamée said. "The next step is to see if people respond to them."

The designers have already created over 100 symbols and are continuing to expand the series.

"We're going to develop them so we have more and more, finding out what is understood and what isn't, and how to apply them in a nice way as we go," said Lamée.

Lava, which was founded in the Netherlands in 1990, is presenting the project for this year's Beijing Design Week, taking place across the Chinese capital until 3 October.

In a Simplified World is on display at the Quanyechang building, close to the Dashilar hutong – just south of Tiananmen Square.

It is one of several "pilot projects" initiated to sustain and improve this traditional residential area, as many others around the city have been destroyed to make way for urban development.