London Design Festival 2014: New York-based Amma Studio has created a range of coffee tables and stools made by moulding cement with a range of unexpected materials.

Sculptor Fernando Mastrangelo and interior designer Samuel Amoia of Amma Studio hand cast each stool in the Drum collection inside a mould. 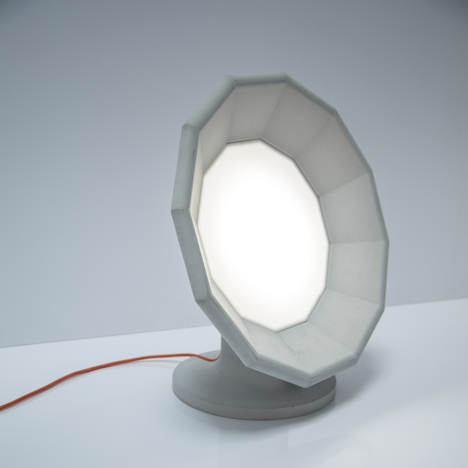 Concrete collection by Matali Crasset for Concrete by LCDA

First, cement was added in layers to create texture, then combined with a "raw material" held together using a UV-protected epoxy resin.

The resin binds the material to itself and to the cement to create a continuous cylindrical form.

Materials they experimented with include rock salts, silica, sand and BB pellets, all in a range of colours, as well as coffee grounds.

"We aim for contrast," the designers told Dezeen. "Finding the right texture to complement the smoothness of the cement – or the right colour to balance the texture of the raw material."

"It's very experimental. Our favourites are the sharper combinations, for example white cement and black silica."

Alongside the Drum stools, Amma Studio created the Quad and Quad3 side tables in the form of square arches and complete square outlines.

The concrete edges are lined with the raw materials using a spinning technique.

"They can be used for almost anything," said the designer. "Side tables, stools, nightstands, consoles, desks... We are currently talking to one client about fabricating custom drums as pedestal bases for her dining table."

Mastrangelo and Amoia met through a mutual friend and were soon working together on a piece for a hotel project in Miami.

They designed an organically-formed bar made of rock salt with a blue cement top, which Amoia went on to show as part of his Elle Decor Showhouse during Art Basel. The response it received convinced them to collaborate on a collection.

Amma Studio exhibited the new pieces as part of the Ventura London showcase of emerging talents at designjunction, during the London Design Festival last month.