Working in collaboration with Number TEN Architectural Group, 5468796 designed the building for a competition that asked designers to envision a future renovation and extension to the Art Gallery of Greater Victoria in British Columbia. 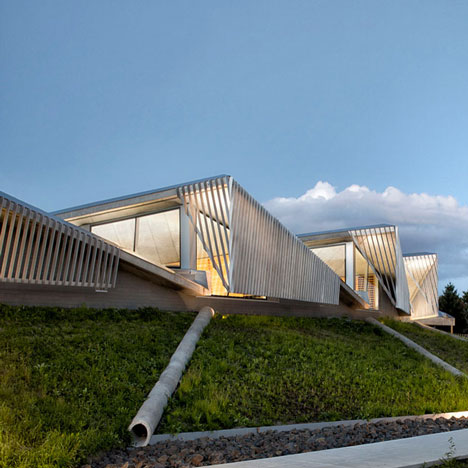 While the current building is a historic mansion with a series of modernist additions, the new facility was conceived as a series of pavilions interspersed amongst public spaces and landscaping.

The wooden "quills" of the building's exterior are designed to cantilever from a metal-mesh wall, functioning as a natural shading device, while a large courtyard would form the heart of the plan, allowing daylight to permeate the interior.

An upper level gallery would house the museum's collection, surrounded by a canopy of oak and sequoia trees.

The project was unsuccessful in the competition, losing out to a project by Lang Wilson Practice and Moore Architecture, so won't be built.

Last year the award went to a museum for China's maritime heritage, proposed in Tianjin by Brisbane studio Cox Rayner. Architect Michael Rayner told Dezeen the project was intended to offer an "understanding of China's maritime past".

The prize was awarded as part of the World Architecture Festival in Singapore.

More from the World Architecture Festival and Inside Festival