Bernhardt Design turned 125 this year, so the brand asked the three designers to come up with new designs for its range that "honour the company's heritage of fine wood-working and upholstery craftsmanship". 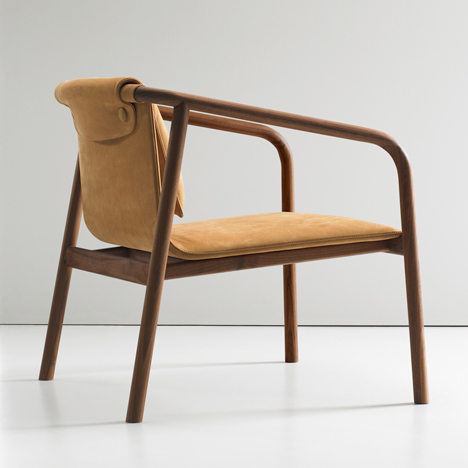 Each designer was asked to reinterpret a piece of furniture that typified American design for them.

"These chairs were such a visible part of the American landscape because of their very powerful presence," said Lovegrove. "Using this historical reference, I wanted to create a chair that is contemporary and a reflection of my design vocabulary."

The chair's arms arc around the sitter to form a continuous curved backrest, while its legs splay outward towards the floor.

The design is named after Anne Harper Bernhardt – one of the company's founders – and is available in solid American walnut with a natural finish. The leather seat comes in a range of colours.

"As in all my work, the Anne chair is about sculpting a material: creating something that has a human dimension and looks interesting from any view," Lovegrove said.

Also taking its name from the founder, the Harper chair by Paris-based Noé Duchaufour-Lawrance references the iconic Windsor chair, which although not actually an American design is often seen on the verandas of houses in Hollywood films.

"In the collective French memory, one vision of America is the view of a rocking chair sitting on an open porch," Duchaufour-Lawrance said. "It might be influenced by the movies, but the picture of a man sitting in a rocking chair on a front porch with his feet up on the balustrade, is quintessentially American."

He deconstructed the Windsor chair and rearranged the components, so the spindly elements in the back become struts that span between the top and bottom of the curved frame.

"The exterior of the Harper chair is very much like a birds nest with a structure composed of twigs," the designer said. "The interior is a cocoon – in this instance a suspended cocoon. The seat and back appear to be floating inside the nest."

The leather-upholstered seat is supported by four pieces of timber that extend seamlessly from the outer frame.

The Harper is made from solid American cherry and maple woods, using a combination of hand craftsmanship and a seven-axis CNC machine.

Scottish designer Jephson Robb used the Chesterfield sofa as his starting point for the Alex sofa as Americans were credited with popularising its name, and because he has fond memories of the design.

"When I was growing up, the first piece of furniture that actually made an impression on me was a Chesterfield sofa," said Jephson Robb. "I was fascinated by all the buttons, and amazed that my head and feet didn't touch the arms when lying down. It seemed larger than life to me."

To update the design, Robb removed all but five of the buttons traditionally used all over the couch and used a horizontal strip along the back to tuft the fabric.

"The biggest design challenge for me was how to communicate quality and comfort without the repetition of buttons and tufting," Robb said. "I decided to go with a single uninterrupted belt that creates one continuous tuft as it traces the interior."

Available in various colours of leather or suede, the design has a solid American walnut base and leg details in bronze.