Brutalism: Denys Lasdun's National Theatre – one of London's best-known and most divisive Brutalist buildings – is a layered concrete landscape that Prince Charles once described as being like "a nuclear power station".

Completed in 1976, the Royal National Theatre stands on the South Bank of the Thames, just downstream of Waterloo bridge. It is formed from two fly towers rising from layered horizontal terraces that wrap around the building, cascading to the river level. 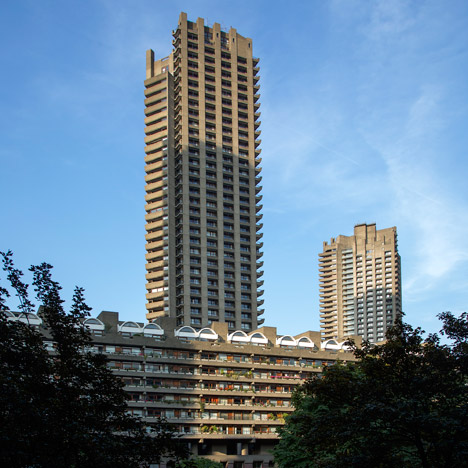 The design for the building was based on Lasdun's idea of "architecture as urban landscape."

"The National Theatre is one of the last great buildings of the age of public sector architecture," said architectural historian Kester Ratterbury, "of a really ambitious public facility which sought to be itself, not a poor copy of commercial work."

"Though labelling things is always unsatisfactory, it exemplifies some of the best aspects of Brutalism: its dynamism, its visceral sense of shock, and the rich, complex and highly contextual spaces it creates."

Lasdun was appointed to the project in 1963. With no previous experience in theatre design, he persuaded the board of theatre directors, designers and technical experts to give him the job without a team alongside him but with the drama of a solo-performance.

"The thing was most of the architects came in groups with their partners and we were another group on the committee, but Denys Lasdun arrived... entirely alone. Very theatrical," said Laurence Olivier, former director of the National Theatre.

The National Theatre was a live project for 13 years, with two years spent on the main theatre alone. "So many hold-ups, the whole National Theatre has been a political football," said Lasdun in a 1976 recording of Desert Island Discs for BBC Radio Four. "It has had a very troubled passage."

Lasdun described the early design process as one of evolution, shaped by consultation with the committee. He stated that it began with the spaces of the theatres themselves, "before we even knew what the outside would look like".

The structure is vast and city-like in plan. It accommodates three theatres, the largest seating 1,160 people, alongside restaurants, bars, foyers, workshops and all the mechanics necessary.

The open-stage theatre, the Olivier, is shaped like a giant ancient amphitheatre and occupies a large area away from the bridge that runs along one side of the site, while the smaller Proscenium theatre, with an arch over the stage, sits on the bridge. A small studio theatre is tucked away to the east side of the building, alongside the offices and other administrative functions.

Great attention was paid to the details of the "quiet" interior of the theatre: lighting, sign posting, fittings, the auditorium seats, a change from the stucco and mirrors of theatres of the period. Lasdun even selected the crockery and cutlery for the restaurant.

Internally and externally, the rough-cast concrete surface of the National Theatre shows the imprint of the sawn wooden planks used in the casting process, which were supposedly each only used twice, once on each side.

Talking to Peter Hall, the National Theatre's director between 1973 and 1988, Lasdun described the use of concrete: "Concrete is a very intractable material, but it can be a beautiful material if it is used in the way its own nature intends it to be used... It is a sort of sculpture that you can only do with reinforced concrete, but you need to work to a certain scale... It is not a cosy little material."

On the river side, a series of interconnected foyers make up the main public area, in an L-shape around the two larger theatres. Admiration of the National Theatre tends to focus on the magic of these internal spaces, which tower in sections to their full height. It has come to be thought of as one of the city's key communal spaces, described as "the nation's sitting room".

Lasdun himself described these spaces as a "fourth theatre". He said "I feel that all the public areas of the building, the foyers and terraces, are in themselves a theatre with the city as a backdrop."

These public interior spaces merge with the terraces outside, or what Lasdun describes as the "geological strata" of his architecture of "urban landscape".

"The strata of the building are like new levels of ground and they will become real places. It is very important that the National Theatre becomes a part of the city. Any idea of a cultural ghetto has gone," said the architect.

Lasdun's strata make it hard to define where the National Theatre begins and ends. The interconnected walkways, split levels and circular stairwells of the South Bank merge with the city itself. Installations and temporary structures have occupied the terraces in the past, including a bright red auditorium by Haworth Tompkins.

Skateboarders came to use the terraces and undercrofts of Lasdun's National Theatre and the other buildings on the South Bank as their playground. Early on, this occupation was seen as evidence of failed architecture yet a recent successful campaign to save the South Bank skatepark has acknowledged it as one of the great spaces of London.

The National Theatre gained a Grade II heritage listing in 1994, only 18 years after it was built.

Despite being thought of with affection by many, such a large public building is bound to provoke controversy. From its conception, when it was compared to a nuclear power station by Prince Charles, to today's debates surrounding a £70 million transformation and renovation of the building by Haworth Tompkins, the National Theatre has divided opinion.