Dutch studio 70F Architecture has created a pair of matching – but not identical – houses in Almere, featuring large windows that bring light into the circulation spaces rather than the living rooms (+ slideshow).

Named Home 2.0, the project comprises two family houses built close to each other in the newly developed city of Almere, next to Amsterdam. 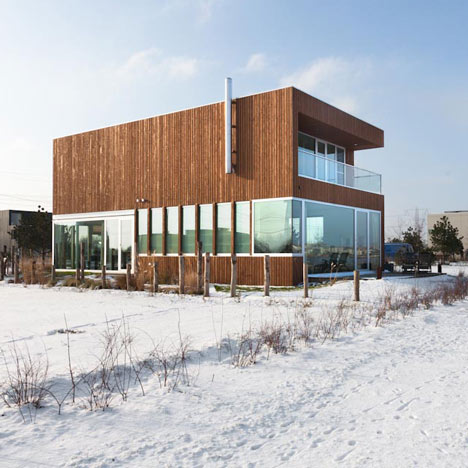 70F Architecture designed the two buildings for a brother and sister and their families, who each wanted a home with space to work, play outside, and be together or apart.

Both three-storey structures have stairs at the front, behind large windows measuring 4.5 metres high and 3.1 metres wide. The windows overlook a nearby lake, and the architect reasoned that the circulation route was the best place to enjoy this view.

"Walking up and down the stairs is a regular activity in these houses, so the occupants will enjoy the view more often like this," architect Bas ten Brinke told Dezeen.

"From the living room, where it is always busy, the young family has little time to stare outside and enjoy the nature and the high embankment in front of the house," he said.

The three floors in both houses are devoted to different functions, offering spaces where the families can come together or retreat.

"Home 2.0 is based on two basic ideas. First, home is the place where you can be yourself and be by yourself. And second, a family is a composition of individuals. In short, everyone should have a place that is home to his or her needs," said Ten Brinke.

To achieve this, each of the three floors in the houses have been designed with a different focus, in order to offer a variety of experiences.

The ground floor is devoted to communal space, with an open-plan kitchen, dining room and living room. In the larger of the two homes, floor-to-ceiling furniture with a white oak veneer acts as a dividing wall between the kitchen at the back of the house and the entrance.

It also features a void in the centre to offer views between the front and back of the house.

"The void is important, because it provides a good sense of the space in such a small house, and also lets the parents to keep track of the children playing in the front garden while they are cooking," said Ten Brinke.

Children's bedrooms and a shared bathroom are located on the first floor, and storage has been added along the hall that runs between them to make the space more useful.

The top floor is designed as a sanctuary for the parents, with a master bedroom and bathroom, as well as a private lounge room at the side.

"The parents have their own living space. This is a very important part of the concept," said Ten Brinke.

Wardrobes and storage units that stop short of the ceiling are used as a more informal division of the spaces on the top floor.

"Using furniture as room dividers creates a much better sense of space," said Ten Brinke. "You feel the complete space, rather than just a small room that would have been defined by walls."

The top floor also features a desk along the stair landing with views out the large front window towards Markerlake – the waterway that separates the Almere from Amsterdam.

Stairs between the three floors feature handrails on one side, and are enclosed by the large window on the other side.

Horizontal timber boards wrap around the exterior of the homes to give each a uniform appearance, and small shutters at the side can be opened to provide ventilation.