Dutch Design Week 2014: experimental garments designed by this year's crop of fashion graduates from around Europe are brought together at this exhibition in an Eindhoven nightclub (+ slideshow).

Modebelofte 2014 follows previous editions of the graduate fashion exhibition, organised by Eindhoven boutique You Are Here for the annual Dutch Design Week event in the city. 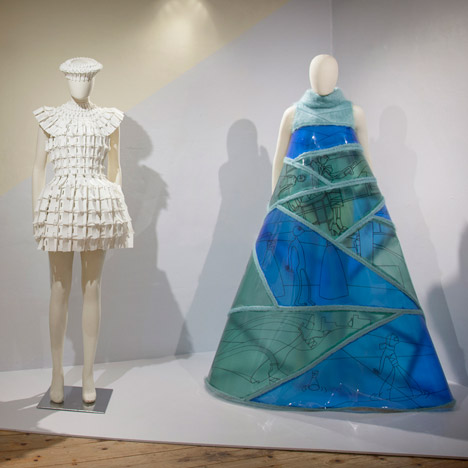 Future Fashions exhibition by You Are Here and Glamcult Studio

Following last year's edition located in a former fire commander's house, You Are Here founder Ellen Albers teamed up with designers Harm Rensink and Niek Pulles to take over a nightclub and curate the selection of outfits for 2014.

Titled Seductive Precursor, this year's exhibition brings together menswear and womenswear designers from institutions in the Netherlands, the UK and Germany.

"The great thing about having an exhibition of graduates is that they're completely fresh, they're showing us their world, their universe," said Rensink. "They're not limited by commerciality or money, which makes them inventive."

Designers chosen to exhibit were selected for their use of new materials, techniques and forms.

"We looked for how people used fabric in innovative ways or used fabrics not usually used in fashion and integrated into garments, as well as new materials made by the designers themselves," said Harm Rensink. "Also those exploring what the human silhouette is."

Examples include work by Emma Hardstaff from Central Saint Martins in London, who coated fur in an iridescent green paint and then peeled it apart again to create a shimmering textured effect.

Bands of soft fabric are layered between hard rings of resin to form a dress by Vera Roggli, formerly of ArtEZ in Arnhem.

The exhibition is split over three main rooms that lead on from one another, which all have black walls and ceilings from the building's use as a nightclub.

White marble pebbles are piled all over the floor and a jungle of plants illuminated with neon lights is created in the back room.

"We wanted to create an exhibition as if you're in some kind of vacuum," said Rensink. "The pebbles on the floor don't have any relation to your house or your school, so when you come in it's like a new world"

"The outfits aren't really wearable in daily life, but if the space doesn't relate to daily life then you have a different view on them."

One outfit per designer is displayed on a black mannequin that's contorted into an un-natural pose.

Some are suspended from the ceiling in Matrix-style frozen jumps, while others are stood awkwardly on the ground.

Glass display cases set into one of the dividing walls are used to present accessories that pair with the garments.

Modebelofte 2014 is open at Stratumseind 34-36 for the duration of Dutch Design Week, which continues until 26 October.