Interieur 2014: Paris design studio Pool has brought together its furniture and lighting for an exhibition inside a dilapidated school building during this year's Biennale Interieur event (+ slideshow). 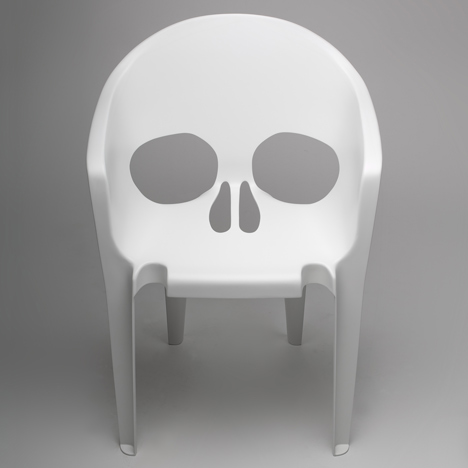 The designers created the Circle chair from black metal tubes, which form the outline of a dining chair with a curved top within a ring that forms the arms.

Gaps between these elements are filled in with smaller bars, arranged parallel to each other but facing in different directions in each section.

"We wanted to draw a chair in an armchair with a simple line," the designers told Dezeen.

"There is an anamorphosis when you look the chair from the front that draw the shape of a simple seating, making the arm disappear."

A straight aluminium tubes sit at the bottom of a perpendicular ring in the same material to form the suspended Trait & Cercle lamp.

The electric cable threads through the top of the circle and connects to the back to the horizontal tube to balance the piece, with the help of a counterweight.

A fluorescent tube light is positioned facing down at the other end.

"We wanted the stroke to be as simple as possible to emphasis the cantilever and make the light stick float," said the duo.

The Trophé vase is created using a sheet of metallic green metal rolled into a cone and fixed at its tip to a black cylindrical base.

"The Trophé is basically the ghost of the paper protection of a bouquet, turned into a metal trophy," the designers said.

These new designs join two pieces released the previous year. A circular table top with an uneven surface rests on a pyramid-shaped base, which holds a brass sphere just above the ground where the black-painted metal elements cross in the centre.

"The Contrepoid table was about balancing the rough side of the hammered top with a lighter and more modern base, keeping captive a brass ball for the balance of the whole structure," said the designers.

For the Maillet table lamp, the same hammered effect is applied to the copper stand. A black metal box that forms the shade has a bright blue anodised aluminium handle at one end to "make it a tool.

"The Maillet lamp was inspired by the traditional tool our craftsman used to hammer the metal," the designers explained.

The pieces are on display inside a tiled room the Broelschool in Kortrijk, Belgium, for this year's Biennale Interieur, which continues until 26 October.

In another part of the school, which is set for demolition, furniture brands have turned the rooms into temporary hotel suites for visitors to the design event.