Paris design studio Appropriate Audiences has combined a 3D printer with a tattooist's needle to form an automated tattoo "printer" that can create indelible artworks on skin (+ movie).

Tatoué is a cross between a Makerbot 3D printer and a tattooist's needle – a small handheld machine that inserts ink into a person's skin using a sharp point, puncturing the skin up to 150 times per second. 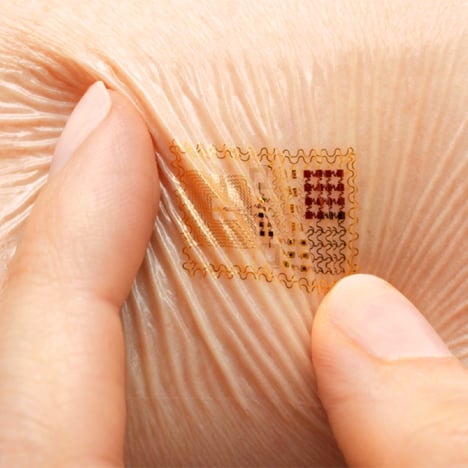 Appropriate Audiences adapted software produced by Autodesk to turn tattoo designs into digital files that can be downloaded to the machine. The user then inserts a limb into the printer and the needle draws the design into their skin.

"The idea of our machine is to give tattoo artists a new tool that offers plenty of new possibilities," the designers told Dezeen.

"Anything you want can be designed on the computer, and replicated onto the skin. We are still working to develop the software in order to produce something that is more user-friendly, particularly for tattoo artists."

The needle replaces the part of the printer that would usually extrude melted plastic to make objects, and has been adapted using bespoke 3D-printed parts. A sensor reads the surface of the skin of the user, meaning the needle can respond to changes in skin texture and the dimensions of the limb.

"We use a three axis machine, which we have deconstructed," explained the designers.

"Making the machine more accessible is a challenge. And there are many possible future applications – in medicine or in fashion – but our priority is a third version of the machine, which will be able to tattoo any part of the body using a specific architecture. We are currently working on this."

The idea for Tatoué was born out of a workshop organised by the school in October 2013 that asked students to use digital material available in the public domain to create something new.

French 3D-printing company Le FabShop was invited to the workshop as a digital manufacturing expert and helped the students develop the idea for a machine that could create tattoos from a bank of digital images.

They initially hacked a desktop printer to enable it to trace on skin using a pen. To develop the idea further, they then borrowed a manual tattooing machine and tested the process on artificial skin.

The first image they tattooed onto a real person's arm was a circle, which they described as "the perfect shape to test the precision of the process."

"A lot of people were excited by the idea of being the first human tatooed by a 'robot'," said the designers.

"The big difficulty was to repeat the same exercise on a curved surface and on a material that has much more flexibility than silicone. Many tricks were tried to tighten the area around the skin – a metal ring, elastics, scotch tape – but the most effective one was a scooter's inner tube, open on the area to be marked."

Since that initial test earlier this year, the designers have been working on developing more sophisticated machines that could potentially tattoo other areas of the body and create more complicated designs.

The level of interest in the project has allowed the designers to dedicate their work to the development of Tatoué full time.

"From the onset of the project we have been exchanging with tattoo artists and now would like to deepen our relationships with them, so as to better adapt the machine to their different styles and practices," they said.

"The next step for us would be to travel and meet as many tattoo artists as possible, in an effort to discover new practices and techniques throughout the world."

Tatoué was on show in Paris last week as part of the Autodesk Gallery Pop-Up – an exhibition on the "future of design and engineering" at Galerie Nikki Diana Marquardt.