News: the Barcelona Design Museum will open in December with newly curated collections that represent Catalonian design history from the third century to present day (+ slideshow).

The collections will be housed in the new 8,000-square-metre building called the Disseny Hub Barcelona. Local studio BM Arquitectes designed the metal-clad structure for the Barcelona Design Museum on a site just off the Placa de les Glòries Catalanes, a large sunken garden in the centre of an elevated roundabout. 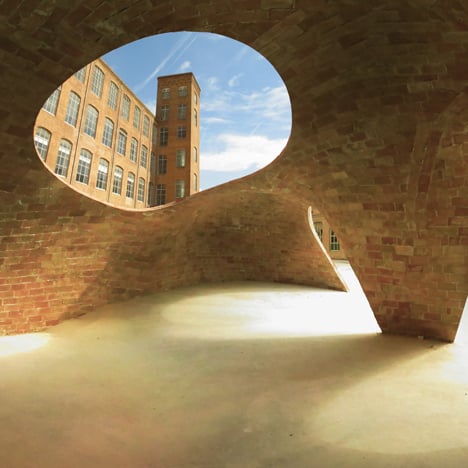 The Disseny Hub draws together over 70,000 items from four previously independent museums – the Decorative Arts Museum, Ceramics Museum, the Textile and Clothing Museum and the Graphic Arts Cabinet – and a research centre.

"The new museum is characterised by a flexible, inclusive discourse, which highlights the transversal aspects of these four large collections whilst also focusing on more specific facets in each," said a statement from the museum.

The newly combined collections, which includes pieces of furniture, clothing, poster design and ceramics aim to encourage visitors to delve into the "historic role of the arts."

"Design is, to a certain extent, a consequence of the earlier decorative arts, whether as a reaction to their ornamental value or as exponents of the new industrial, post-industrial or digital world."

Four exhibitions of the permanent collections that "reflect the dynamic nature of design, designers and society itself" will coincide with the opening of the museum, encompassing product, graphic and fashion design, as well as artworks.

"The new centre traces the evolution from decorative arts to design, an area in which Barcelona has always stood out, and particularly, explores the future perspectives for this discipline," they said.

The collections will be presented within MBM Arquitectes's Hub building, which is clad in zinc plates with large sections of glazing that give the museum "an industrial feel."

A large angular volume containing an auditorium cantilevers from the top of the building over the tramlines of the Glòries station at one side of the site, while on the other side a further overhanging box has large sections of glazing that look over an artificial lake.

The two projections, coupled with the metal cladding, give the building an anvil-shaped appearance.

The Documentation Centre houses an archive and public library of over 22, 000 documents alongside a space for educational workshops.

"The goal is for visitors to understand and take part in the process that lies behind the creation of an object, concerning its concept, functions and forms, production, use and social representation," said a statement from the museum.

The Disseny Hub Barcelona will open on 14 December 2014.