NLXL Lab has collaborated with designers including Thomas Eurlings and Piet Hein Eek to create a series of wallpaper patterns and murals.

Wallpaper company NLXL established NLXL Lab to enable the release of products outside of collections and traditional launch seasons. 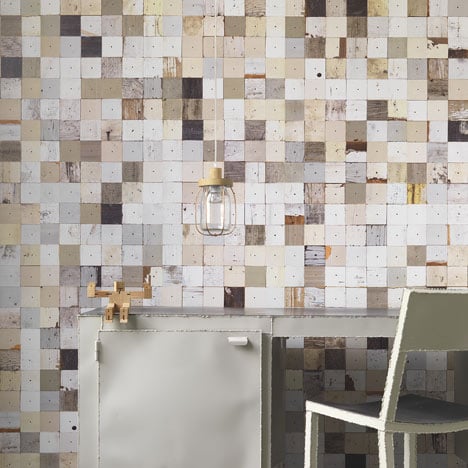 An example of this is Piet Hein Eek's Black Brick Wallpaper, which wouldn't fit into the designer's previous set of patterns that replicates weathered wood textures for the brand.

"We talked about a 'black brick' wallpaper, but it would have been weird to add this idea to the Scrapwood Collection," said Vintage.

NLXL Lab Wallpaper Editions provides a way to put this idea into production. "This new wallpaper is inspired by common materials and colours anybody would love to have on their wall," Eek told Dezeen.

Dutch designer Erik Gutter created Greenhouse Wallpaper, a wallcovering that mimics the view into a greenhouse filled with plants.

"My background being flora, I have always applied plants in interiors," said Gutter. "The greenhouse windows on the wallpaper resemble a framework through which you can see the green landscape, turning a solid wall into a greenhouse wall, making you look outside."

Tattoo Wallpaper is by Graham and Doug van der Pas of Cookie Bros and features images taken from tattoo flashes – the designs printed or drawn onto paper or cardboard and used in tattoo parlours to give customers ideas.

"Tattoo culture is something we want to share. We actually have some of the tattoos used in the design on our bodies," said the designers. "We worked with 100% authentic tattoo flash, drawn by one of the best artists out there, Daniel 'Danny Boy' Sawyer."

Jeanine Eek Keizer designed the Crown Caps Wallpaper, featuring hundreds of different crimped metal bottle tops. "I have been collecting various objects for 25 years, and I had a very nice and large cork-crown collection," she told Dezeen.

"My husband Piet Hein Eek and I made wooden panels to put the real crown corks in and they became beautiful artworks on the wall. When we filled a whole wall with these artworks, it naturally became an idea for wallpaper."

Thomas Eurlings' Gradient Wallpaper was designed to change the perception of the room it was applied to. "The vertical fade to white makes the ceiling feel high and lighter as if a soft mist is hanging from the ceiling," Eurlings told Dezeen. "The design consists of silhouettes and keys that are characteristic of my work."

Mr and Mrs Vintage have also created three wallpaper murals, which are made from non-woven fabric and do not include a repeat.

More one-off wallpaper editions by NLXL are expected from Piet Boon, Studio Job and Merci, amongst others. "We're just going to put out stuff we love," said Vintage. "Sometimes distributed worldwide, sometimes in limited editions. Just to see what will happen."