Influences from Swedish architecture and traditional Japanese decoration combine inside this blackened timber extension to a hotel near Stockholm by local firm White Arkitekter (+ slideshow).

The Yasuragi spa hotel is located on Cape Hasseludden to the east of central Stockholm. White Arkitekter's extension adds 27 rooms nestled among trees on a rocky site.

The original building was designed by Japanese architect Yoji Kasajima in 1970 and was used as a conference centre before its transformation into a Japanese-style hotel in 1997. 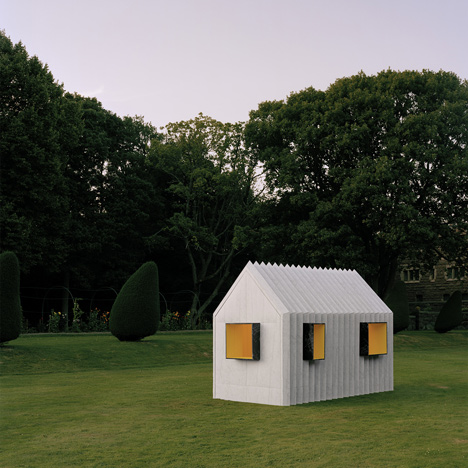 Kasajima's design combines concrete walls and timber cladding typical of the era. White Arkitekter based the design of the extension on the aesthetic of the existing building and aimed to "play with the same kind of materials and style but in a more modern and minimalistic way."

"Raw concrete was already a part of the existing building and it felt natural to continue its use as it is a beautiful material which feels clean, honest and timeless," the architects told Dezeen. "The wood is pine which grows on the site and is a typical Swedish species."

The extension is placed on top of an existing wing to ensure each of the rooms has a view towards nearby Höggarnsfjärden Bay.

A concrete-lined staircase leads to a corridor with glass walls along one side, which frame views of the pine forest. The other side of the corridor incorporates doors to the suites, which feature materials and details that continue the hotel's Japanese theme.

"Modern Japanese and Swedish style have many similarities in their minimalist simple expressions and we have taken advantage of those similarities," explained the architects, who recently completed a copper-clad school in Norway.

"We are inspired by traditional Japanese design and patterns such as tatami mat dimensions and the wave pattern, seigaiha, which we used in wallpaper and furniture," they added.

The seigaiha pattern, which was used to depict oceans in ancient Chinese maps and is commonly found in traditional Japanese costumes, has been applied to wallpaper, headboards and textiles as a consistent decorative feature.

Blue hues are used throughout the rooms to reference the sea, with pine wood and stone also featuring prominently to emphasise the connection to the surrounding nature.

Rooms have either smooth pine floorboards or floors covered with straw tatami mats, while the bathrooms incorporate stools, pails and soaking tubs to facilitate the performance of traditional Japanese ablution rituals.

Photography is by Idha Lindhag.