This low-cost centrifugal device by British designer Jack Albert Trew fits onto the wheel of a bicycle, providing a simple blood diagnosis for patients in remote parts of Africa (+ slideshow).

Western medical devices donated to Africa often have a limited shelf life due to unreliable electricity supplies and a lack of budget for maintenance and repairs. 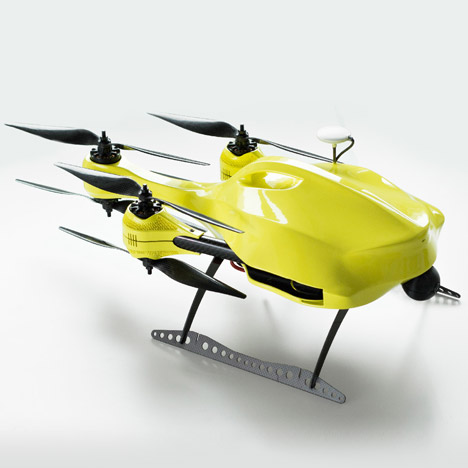 Ambulance Drone could deliver life-saving equipment "within one minute"

Jack Albert Trew's Spokefuge provides an alternative by replicating western medical theory, but housing it within a design more suited to rural regions.

"I stumbled across a very interesting article, that highlighted the importance of bicycles in developing countries," Trew told Dezeen.

"Bicycles are now the favoured, if not the only, method of transport in many regions across Africa," he said.

"Something just clicked, I had seen bicycles being used to power medical equipment in rural clinics, but I wondered if a bicycle could become the equipment instead."

Microhematocrit centrifuge devices are used to determine the blood's hematocrit — the ratio of red-cell volume to whole blood volume.

Centrifugal force created by spinning the samples at very high speeds separates the different densities of blood, so the hematocrit can be measured to help diagnose issues including blood loss, anemia, bone marrow failure and leukaemia.

Trew's version of this device, currently a prototype, is made of seven 3D-printed parts that can be slotted together by hand.

Once constructed, the device attaches securely to almost any working bicycle wheel, while a swinging arm remains free to spin on the encased ball-bearing unit located inside.

When two or four blood samples are placed in the provided capillary tubes, they are sandwiched in a rubber casing and inserted into the pivoting centrifugal arm and sealed with a rubber lid.

While the bicycle is ridden in a fixed position or the wheels are rotated once it is upside down, the simple swinging arm keeps blood samples level until a sufficient speed is reached.

At this point, gravity will force the objects to move outwards and the blood samples to separate.

Cases in four different tones are attached to the spokes to create a colour wheel to the eye once it spins.

When the appropriate speed is reached, the colours merge into one another as the human brain is no longer able to distinguish the separate colours – instead seeing off-white.

"This method of speed regulation is not the most precise and calculated method available, however it is a far simpler alternative that will help to keep the cost of the device low," said Trew.

Spokefuge was shortlisted for this year's James Dyson Award, which celebrates innovative projects by young designers.