News: Foster + Partners has teamed up with building contractor Skanska to pioneer the use of 3D-printed concrete in the construction industry.

Norman Foster's architecture firm is part of the team working with Swedish concrete manufacturer Skanska to develop the technology to robotically 3D print high-performance concrete, which could be used to build architectural structures.

Skanska aims to "develop the world's first commercial concrete printing robot" within the first 18 months of a development programme that is taking place in collaboration with Loughborough University in the UK. 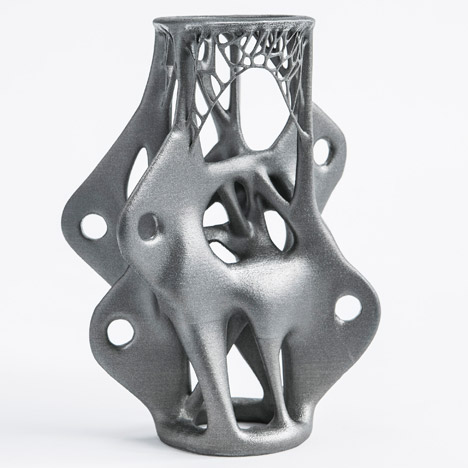 The computer-controlled machine would work by precisely laying down successive layers of concrete, via a gantry and a robotic arm.

The device could significantly reduce the time it takes to produce concrete building elements, making it an even more cost-effective material within the construction industry.

"3D concrete printing, when combined with a type of mobile prefabrication centre, has the potential to reduce the time needed to create complex elements of buildings from weeks to hours," said Rob Francis, Skanska's director of innovation and business improvement.

"We expect to achieve a level of quality and efficiency which has never been seen before in construction."

As well as Foster + Partners, the research team is working with contractors Buchan Concrete, ABB and Lafarge Tarmac, with an aim to establish a 3D printing supply chain.

They are confident that the robotic system, currently at its second prototype, could be used to manufacture complex structural components, curved cladding panels and other architectural features that are impossible to produce using conventional processes.

"We have been convinced of its viability in the lab, but it now needs the industry to adapt the technology to service real applications in construction and architecture," said Loughborough University researcher Richard Buswell, who has been working on the project since 2007.

"We have reached a point where new developments in construction manufacturing are required to meet the new challenges and our research has sought to respond to that challenge."

Skanska and Loughborough University have signed an agreement to share the licence to the technology.

The announcement comes in the same year that Arup unveiled a prototype for 3D-printed steel construction joints. This time last year a British architect also claimed to have designed and installed the first approved 3D-printed components in the construction industry.