Rows of irregularly shaped bricks will create patterns around these three towers that architecture graduate Olivia Wright has designed to transform a derelict and vandalised pottery factory in the English midlands into a conservation centre.

Olivia Wright proposed the renovation for a ruined pottery site in the Burslem region of Stoke-on-Trent for her final project at the Royal College of Art. The local council, which was seeking to redevelop the site, selected Wright's plans and hopes to start building work next year.

Damaged bottle-shaped kilns and supporting factory buildings will be refurbished, and three new structures representing kilns that once stood on the site will be built using origami-like brickwork.

"The three structures made up of the slip cast bricks resembling the form of the bottle ovens that were destroyed on site symbolise the aim to regenerate the area whilst combining former and modern construction methods," said the architect. 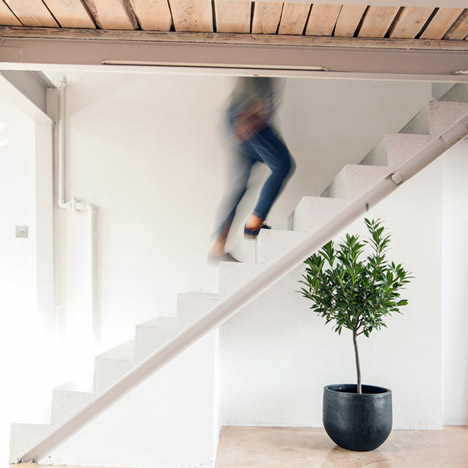 The potteries closed following a post Second-World-War slump in demand for British-made pottery and the introduction of the 1956 Clean Air Act, which saw the decline of vertical bottle-shaped kilns and their replacement with horizontal tunnel kilns.

In 1979, English Heritage earmarked 47 of the originally 4,000 bottle ovens to be protected with Grade II Listing status – three of these, formerly owned by manufacturer Acme Marls Ltd, will be the focus of the project.

"Burslem was once perceived as the 'mother town of the potteries'," Wright told Dezeen.

"The most prominent feature of the pottery factories – the iconic bottle oven – was beginning to be perceived as a bygone element of the industry that could be replaced by tunnel kilns."

Wright designed a custom set of angular slip-cast bricks to enclose the new towers, each featuring either an opening or peg that will allow them to be slotted together into different formations. The bricks will be hooked onto steel hoops to form the structures.

"The six different bricks were made by distorting a square," said Wright, who studied at the Architectural Association before completing her Masters at the RCA in 2014. "I was enthralled by the idea of something being destructed and remade."

Bands featuring different configurations of the bricks will wrap around the three towers, creating a range of textures that change towards the top of the tapering towers.

Berslem Council hopes the department and school of brick conservation, and accompanying pottery workshop, will obtain planning permission by 2015, with building work to begin shortly after. Applications for entrants to the conservation school will open in 2017.

"The council sees it as a good opportunity to use the old structures as heritage tourism," said Wright.

Due to funding shortages, building works are expected to take place over a period of 10 years. The project is part of a larger vision to preserve the heritage of decaying British potteries.

The project is currently on show in London as part of the Futures in the Making exhibition curated by the Architecture Foundation.