Four small blocks fan out from the facade of this white concrete house on a Portuguese island by local studio M-Arquitectos (+ slideshow).

M-Arquitectos designed the 240-square-metre house for a rural plot outside the city of Ponta Delgada in São Miguel Island – a volcanic isle off the west coast of Portugal. 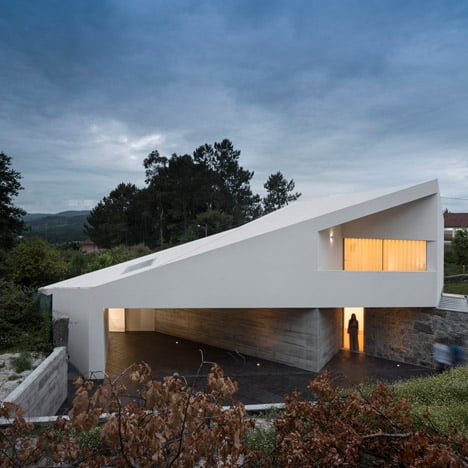 The utility rooms of the irregularly shaped Casa Rosto do Cão were arranged across the road-facing side of the property, while living and sleeping areas have been positioned so that they look out onto open farmland at the rear.

The client requested a simple and cozy but "unfamiliar" form for the single-storey house.

The architects responded by adding cutaways in the facade, portioning up the volume into chunks that house a second bedroom, a kitchen-diner, a car-port and a utility room.

Sloping roofs rise to meet the flat L-shaped plane that stretches across the living room and master bedroom, providing a non-standard gabled profile.

"The building took this form as a result of rethinking the traditional Azorian house, known for its gable roofs," said studio architect Rodrigo Sequeira Dias Filipe.

"The volume naturally settles over the smooth terrain, respecting the existing topography in order to gain views of the sunset and the vegetation with the least impact on the surroundings."

High-level lighting accentuates the gabled roof structure inside the house. Windows on the sides of the splayed blocks bring in light from the south, while floor-to-ceiling glazing wraps around the rear of the building.

At the back of the property, a landscape window cut low in the wall of the master bedroom aligns with the bed to offer reclining views of the coastline and mountainous backdrop.

The white-painted spaces are dressed in a combination of contrasting dark wood and white marble.

The living space, which features the glazed facade made up of small black-framed panes, is centred around a wood-burning stove with a black flue.

A slim wooden sun deck follows the outline of the room and is shaded under the overhang of the roof. The triangular section of roof is supported at its tip by a single black column.

Photography is by Paulo Goulart.