Movie: architect David Mikhail explains how he transformed a typical 19th-century London house into a "great family home" with all of its "original dignity" in this movie produced by Living Projects.

Mikhail, one of the two founders of London firm Mikhail Riches, was invited to rework the home of Lisa and Ash – a couple living in the city's east end. 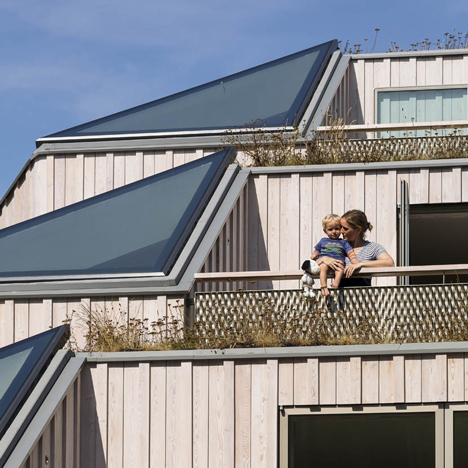 His solution, completed last year, involved adding a larch-framed glass box that stretches along the rear elevation to create a sunken kitchen and dining room that opens out to the garden.

"What I was thinking when I was walking around initially was we've got to do something that ticks the boxes of a great family home with a connection to the garden," he explains in the film, "but at the same time to give back the house its original dignity."

The architect used a simple palette of colours and materials throughout the interior – white brick, stone, Siberian larch and bronze – to tie together old and new elements. He describes the project as a "big house that has been knitted back together".

Skylights were added, ensuring that new parts of the building receive plenty of natural light. "It's a way of ensuring that whilst we're extending the building we're actually bringing light right down where otherwise it might end up being quite dark."

The bronze detailing extends to a staircase that joins the kitchen and dining space with a gallery landing. Mikhail sourced the bronze from a company that makes ship propellers.

"There are no welds or anything, it's just really finely laser cut," he says.

The kitchen and dining space opens out to the garden, even though they are a storey lower than street level.

"With the brickwork walls, which wrap right from the inside to the outside, the garden really feels like it is just an extension of this kitchen dining room," continues Mikhail.

Garden designer Jane Brockbank, who worked on the landscaping, adds: "Because this garden is so much part of the house, the same language has been used inside and out, and it's a very fluid space inside and out".

Read more about the project in the original story on Dezeen.

Photography is by Tim Crocker. Movie is by Living Projects.