Design Miami 2014: wire-mesh furniture was shown against a gridded backdrop by assistants dressed in matching garments during this year's Design Miami fair (+ slideshow). 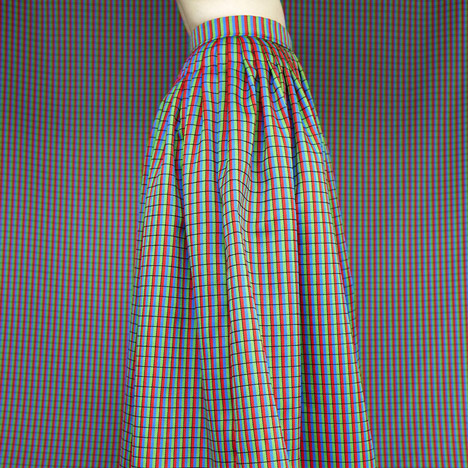 The show, named Surfaces On Which Your Setting and Sitting Will Be Uncertain, was designed to reference Italian design collective Superstudio's Quaderna series from 1970 and installations by Postmodernist designer Ettore Sottsass.

Each leg is the width of one square in the grid – approximately eight centimetres – and the surfaces are one square deep.

Black mesh was also used to create the body of a cuboid-shaped cabinet, raised up on four thin steel legs at each corner.

The collection also includes a standing figure with a circular head and squared-off limbs, and another knelt down with its "hands" on the floor – forming a coffee table on its horizontal back.

"The objects, made from welded wire mesh, seem to change when one moves in their presence, in some way becoming different with each step taken around them," said a statement from the gallery.

RO/LU also collaborated with Various Projects to create the range of clothing patterned with the same grids.

The black lines cover white dresses, tops, skirts, leggings and a jumpsuit, in materials including neoprene and silk.

One of several Design Curio booths at Design Miami, the small presentation space was lined with wallpaper and a wool rug – both also designed by Various Projects.

An exhibition of the designs first opened at Patrick Parrish Gallery's Tribeca location at 50 Lispenarts Street, New York, in September.

Design Miami concluded on Sunday, but all the items are available to purchase from the gallery.