Eindhoven studio OS & OOS have unveiled a version of their Keystone chair upholstered in textiles from the Raf Simons collection for Danish company Kvadrat.

Produced by Danish firm Please Wait to be Seated, the upholstered chair was designed by OS & OOS as a more practical version of its concrete and ceramic predecessor, and is built around a wooden frame. 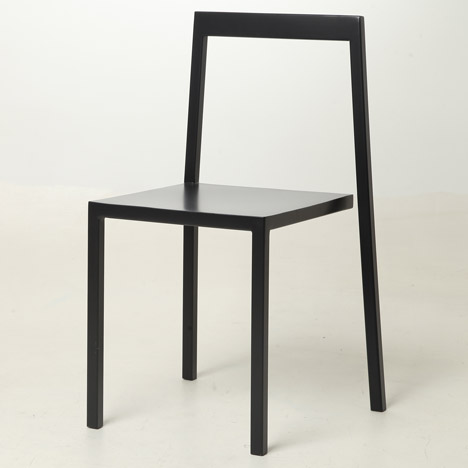 Chair 3/4 by Sandro Lominashvili looks like an optical illusion

The Keystone chair features three distinct elements that, according to designers Oskar Peet and Sophie Mensen, are "abstracted and reassembled" interpretations of three key elements found in Roman bridges.

Peet and Mensen describe these as: "spanners – elements which connect the bridge to the surface and ensure this foothold does not slide or move – the elemental building blocks, and the keystone, which when inserted completes the fundamental arch shape."

The back is formed by a chunky angled element, representing the spanner, while another arched-shaped section forms the seat. These two pieces are joined together by the triangular-profiled "keystone", which sits the opposite way round to how it would in a bridge.

Each of these parts has been covered in a different textile from the collection designed by fashion designer Raf Simons for Kvadrat, which launched earlier this year.

"The three separate elements of the chair remain, but upholstered in three different colours and textiles from the collections," said the designers, who saw the fabrics at Milan interior design store Spotti during this year's Salone Internazionale del Mobile in April.

"We were rather [impressed by] how well the textile worked in contrasting combinations, which led us to the idea of using it for the Keystone chair," they told Dezeen.

With a concrete backrest and ceramic seat, the original chair was "as far from a commercial product as it could get," said Peet and Menson. "We almost see that chair as a pure investigation in construction, form and function."

The initial design weighed around 450 kilograms and was "built and formed around the idea of using weight as the concept," but the Raf Simons textiles have been used to soften its appearance for the new model.

"We didn't expect the two chairs to feel so different from each other to be honest," Peet and Mensen said. "Proportionally they share everything together, but the tactility of the materials really set them apart. The use of concrete and stone fits so well with the original concept as does using textile for the lighter version, it just seems to fit."