A beam of orange light slices through a blacked-out gallery inside Frank Gehry's Fondation Louis Vuitton building, in an exhibition by Olafur Eliasson that aims to skew viewers' perceptions of space (+ slideshow).

In his first French solo show in over a decade, Danish-Icelandic artist Olafur Eliasson presents a collection of light installations in the galleries of the Frank Gehry-designed Fondation Louis Vuitton in Paris, which completed earlier this year. 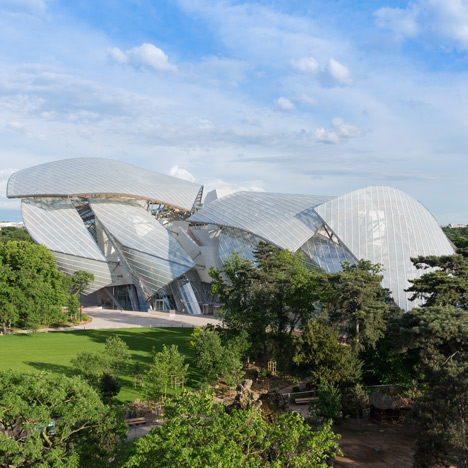 The exhibition, called Contact, plays with the perception and construction of spaces though a series of installations that aim to absorb visitors in fields of light and shadow.

The artist, who works out of studios in both Copenhagen and Berlin, also designed the 2007 Serpentine Gallery Pavilion with Snøhetta's Kjetil Thorsen.

"My exhibition addresses that which lies at the edge of our senses and knowledge, of our imagination and our expectations," explained the artist. "It is about the horizon that divides, for each of us, the known from the unknown."

In a blacked-out gallery, visitors bask in the orange glow from a slither of light that cuts across the curving wall. The contrast between light and shadow is intended to give the illusion of the sun crowning over the black silhouette of the earth.

The work echoes an earlier piece in the vast Turbine Hall of the Tate Modern, titled The Weather Project, where viewers were bathed in the light of an artificial sun.

In the middle of another darkened space, a black sculpture encircles a bright light to cast a web of criss-crossing shadows across the wall. The silhouettes of visitors who pass in front of the work are also projected across the band of light.

On the roof of the Fondation, an apparatus that tracks the movement of the sun directs rays of light into a geodesic globe suspended from a gallery ceiling and a number of smaller optical devices are distributed along a network of specially constructed passageways.

Outside, a colonnade of mirrors named Inside the Horizon borders a pool of water. The 43 triangular columns, clad on two sides in mirror and on the other in illuminated panes of yellow glass, reflect fragments of the surroundings to augment Gehry's architecture.

The exhibition, curated by Hans Ulrich Obrist, Laurence Bossé and Claire Staebler, will open to the public on 17 December and run until 16 February 2015.