Najla El Zein Workspace chose a varied selection of materials that would cause different sensations when moved over the skin to create the bristles for the five Sensorial Brushes, described as "marble-sculpted pleasure tools". 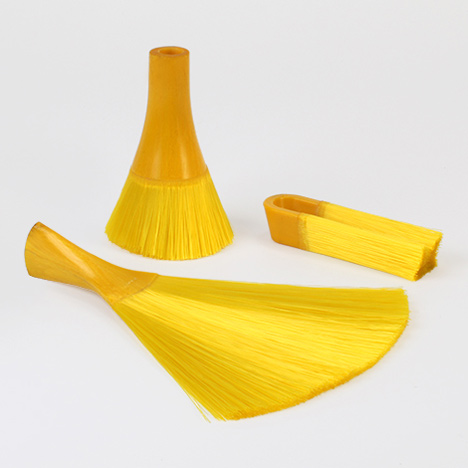 "The sensations are enhanced with ordinary and unconventional materials such as eyelashes, feathers and hay," said studio founder Najla El Zein, who installed 5,000 spinning paper windmills in a doorway at London's V&A museum last year.

The first in the series is Scratch, formed from 21-carat gold plated elements shaped like fingernails arranged concentrically on a flat disk.

The pad of nails is set onto the end of a rounded handle sculpted from black Tala marble, supplied by local company Marm Group.

Brass pins are embedded into the surface of a bulbous white Pentelic marble tool named Stroke, with a section left clear so a hand can grip it.

The pins gradually decrease in size down the length of the implement, which can be placed on a brass rest with a black marble base.

Tickle comprises a large feather sticking out from a white marble pebble, held in a tall brass stand.

Another design, titled Sweep, has soft bristles created by strands of dried grass. Finally, a thin marble pole with fake eyelashes attached to its rounded end is called Blink.

Sensorial Brushes are on display as part of an exhibition titled Naked at Le Yacht Club in Beirut, organised by Lebanese non-government organisation House of Today and running until 17 January 2015.