Architecture studio Lipton Plant has turned a small space at the side of a Victorian house in north London into the glazed entrance for a basement extension focused around an oak staircase (+ slideshow).

Located at the end of a cul-de-sac, between the areas of Barnsbury and Newington Green, the original brick building is typical of its era, with a central staircase and one room on either side at each level. 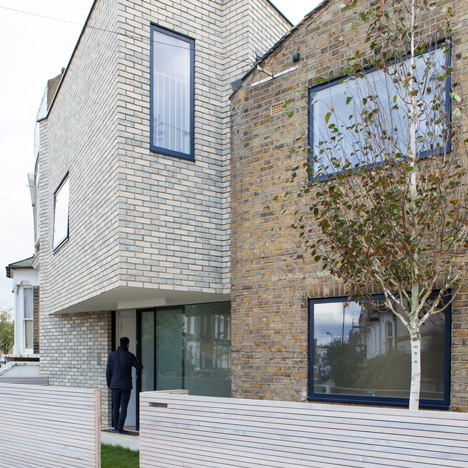 Having inherited a modern glazed extension on the lower ground floor when they purchased the house, the owners were expecting their first child so asked local firm Lipton Plant to expand this and create an extension that would effectively act as a one-bedroom flat for a nanny.

"Although we were able to utilise some of the side access to form the new addition the client was insistent upon retaining the parking space and as much of the rear patio as possible," explained studio co-founder Edward Lipton.

"Furthermore it was important to retain an access for the client from front to back via the side access to ensure security of the overall property was in their control."

The resulting design, called the Peekaboo House, wraps around one corner of the existing house, with the majority of the new space hidden underneath a patio to the rear of the building.

From the back, the addition is visible as a stepped box, with glazing on the front and back sides. A walkway that connects the front garden to the back garden is defined with a white rendered wall at the side.

This box provides a one-and-a-half storey void that is occupied partially by an oak staircase, connecting the ground floor to the new basement bedroom, living space and kitchen arranged in a row along the back of the site.

"Formed from solid oak, the staircase hugs the corner of the existing building and steps down beneath the steps in the glazed roof over," Lipton told Dezeen.

"The result is a dramatic space and stair that occupies the minimal amount of space allowing the new rooms and retained patio to be as large as the client desired."

The bottom two steps extend to wrap around the corner and part of the back of the building, providing access to the existing playroom, which sits at a slightly higher level than the new spaces.

These steps also create a bench for a small dining area with a simple table, nestled in between the other spaces underneath a glazed roof.

"This subtle change in level allows the spaces to be utilised as one whilst also differentiating the separate uses of the two areas," said Lipton.

"Although small and modest, the use of space and light has created a successful new dwelling for the nanny whilst forming a useful playroom to the main house between which sits the new oak stair."

Lipton Plant has completed a number of extensions to houses in north London, including a pale brick addition to a mid-century home in Stoke Newington and a two-storey structure made of blue brick with a glazed roof strong enough to walk on.