CES 2015: San Francisco designer Yves Behar has unveiled a "sculptural" television with a curved screen for Samsung at the Consumer Electronics Show in Las Vegas (+ slideshow).

Yves Behar, founder of design studio Fuseproject, revealed what he called "the next generation of TV" at Samsung's press conference at CES 2015 yesterday, the S9W Curved TV. 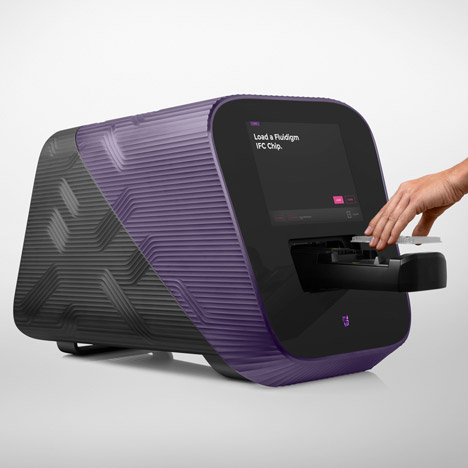 "Over the years, I've closely watched the evolution of Samsung's TVs," said Behar during the presentation of the Korean brand's SUHD televisions, which are designed to produce a higher picture quality and more colours than current liquid crystal display (LCD) models.

Treating the product like a sculpture, Behar mounted the curved screen atop a cube-shaped base that contains speakers and the bulk of electronics to keep the display as thin as possible.

"We designed the new Samsung TV around that thin curved blade, it's so sculptural," said Behar. "We approached this project not as a consumer electronic, but as a fine piece of craftsmanship."

Dezeen Book of Interviews: Yves Behar features in our new book, which is on sale now

"We thought: 'what's the best way to display a sculpture?' Paintings used to be on easels and hung on walls, but sculptures are elevated, generally lifted off the ground," he added. "This allowed us to remove all complexity from the display, to keep it thin, light and to present the product on a pedestal."

Surrounding the 80-inch surface is a chamfered bezel frame, designed to add depth to the screen.

Behar's design is one of three SUHD TVs that Samsung is launching at CES.

This creates image quality that is a step up from the ultra high definition (UHD) picture that Samsung's previous curved televisions display.

It also allows for greater brightness than LCD screens, which produce colours by blending combinations of pixels and then filtering the light to remove unwanted tones.

"The most amazing thing about design is how form, function and inspiration intersect," said Behar. "Samsung's curved TVs are a great example of that. In a way it's like art."

CES 2015 opens to the public today and continues until 9 January at various locations across Las Vegas.