These stackable containers by Taiwan designer Kenyon Yeh are all made in different materials and sizes, but combine to form a sculptural object.

"The idea was to have stackable vessels in small, medium and large with different heights that allow them to be used in different situations and for different needs," Yeh told Dezeen. 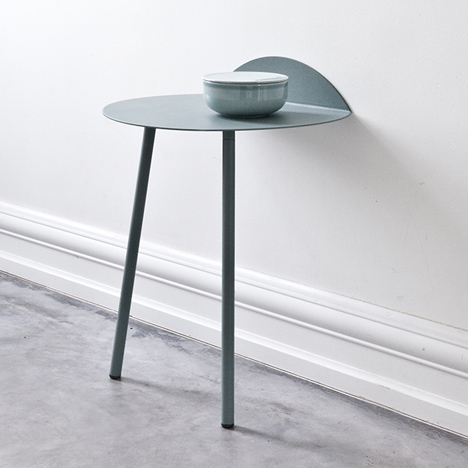 When not is use, the three fit inside each other for display as a decorative piece.

The designer originally proposed the pots in ceramic, but decided that the material on its own lacked the qualities he was looking for.

Instead, Yeh chose the three materials with different lustres, opacities and weights to form the collection.

"In the end there is a nice texture combination with the minimal vessel forms," said the designer, who has also created a flat-pack wooden coat rack that leans up against a wall or corner.

The ceramic planter is cast in a mould and the glass container is hand blown. The copper vase is formed with a metal-spinning technique.

"Even though Flue is made from different materials with different techniques, it still maintains the form and the simplicity of one family vessel," Yeh said.

Another of Yeh's previous projects is a two-legged side table that rests on a vertical surface for Danish brand Menu.