Spindly orange walkways are raised above the waters and meadows of this wetland park designed by landscape architects Turenscape on a neglected river in China (+ slideshow).

The Slow Down: Liupanshui Minghu Wetland Park was designed by Beijing landscape studio Turenscape for the River Suichenghe, in the city of Liupanshui, Guizhou Province. 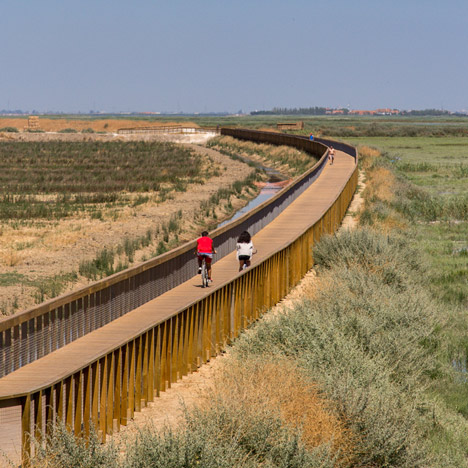 The industrial city – once dominated by coal, steel and cement factories and the pollution from their industrial chimneys – sits in a valley surrounded by limestone hills with the river running though its centre.

Now, elevated walkways wind across the wetland on concrete stilts plugged into the riverbed silt, while grasses and flowers line the river and an observation tower made from metal framework perches on a waterside platform.

The regeneration project was commissioned by the local government as part of a campaign of environmental improvement for the city.

"A rainbow bridge that flies above the wetland park acts as an access into the designed wetland," said the architects, "and as a linkage that invites the ever busy residents to 'slowdown' their pace to enjoy the everyday landscape surrounding the city, the beauty of which has been forgotten and misused over the past decades."

The bulk of the project is situated around the river's drainage basin, where pedestrian and bicycle paths thread across the expanse of water and around its perimeter.

The orange causeways take a twisting route across the terrain, designed to slow down the pace of promenaders.

The architects widened the banks of the river, which was channelled into a narrow flow in the 1970s as an unsuccessful solution to flooding.

"The former meandering mother river became an ugly concrete, lifeless ditch and its capacity for flood retention and environmental remediation was totally lost," said the architects.

They also added a seres of interlocking bioswales – terraced pools designed to stem the flow of storm water and strain surface sediment from the water.

It is hoped these will also act as "a green sponge" that filters the harmful pollutants washed into the water from neighbouring agricultural land.

Mud banks emerge above the water's surface at the edges of the terraces to support patches of planting, while narrow decked pathways fork around the pockets of water and an avenue of trees lines one crescent-shaped trail.

The 90-hectare wetland park is the first phase in the wider infrastructure development and is expected to become a catalyst for other urban development. The site was officially designated as a National Wetland Park in 2013.

Photography is by Chunjie Xing and Kongjian Yu.