News: Herzog & de Meuron's severely delayed concert hall for the Hamburg Elbphilharmonie finally has an opening date set for 2017, but its price tag is now more than 10 times the original estimate.

The city government has confirmed that Elbphilharmonie Hamburg will open its doors on 11 January 2017, 10 years after construction first began to convert the former warehouse beside Hamburg's Elbe river. 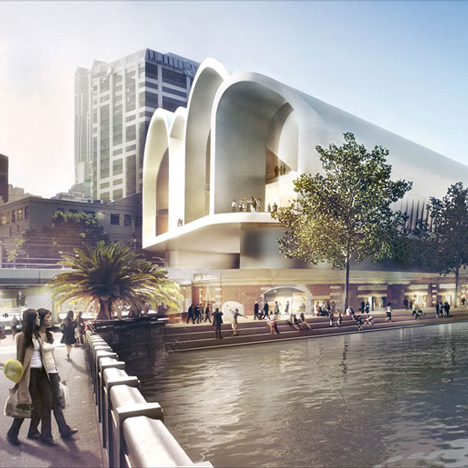 Herzog & Meuron's design was originally projected to cost just €77 million (£60 million). According to the Hamburg Senate, the expected final price has now rocketed up to €789 million (£617 million), although a portion of that will be covered by investors.

The concert hall is being built over an existing 1960s structure by Hamburg architect Werner Kallmorgen. Herzog & de Meuron's renovation involves adding a new glazed upper section that allows the creation of three concert halls, including the 2,150-seat main auditorium.

It topped out in 2010, but a series of construction issues and spiralling costs led to a temporary suspension of work on the project in 2011.

"What we are experiencing in the construction of the Elbphilharmonie could have been prevented," admitted Hamberg mayor Olaf Scholz, speaking after the new construction timetable had been announced.

"Should one have had the courage and the willingness at the beginning to plan the building in its final form and only then to procure, it might have been clear from the start that this sophisticated concert hall could not be erected at the price negotiated back then. It is also clear that, once completed, the Elbphilharmonie will be an impressive building that will be visited and used by many citizens and many visitors to the city."

He added that the final steps required to complete the project "are still ahead and will not be easy".

The architects are also responsible for a new 4,000-square-metre plaza that will be elevated 30 metres above the ground to offer views across the city and harbour. This space is scheduled to open to the public in November 2016.

"While the reorganisation is associated with concessions for all stakeholders involved, it provides the basis for resuming construction work and for providing Hamburg with an extraordinary concert hall. Yet the construction of the Elbphilharmonie continues to be a major challenge that can only be successfully managed if all parties remain on the chosen path of constructive collaboration."

Herzog & de Meuron presented the project at the 2012 Venice Architecture Biennale, to demonstrate the impact of planning difficulties and how cost inflation can affect the architectural industry.

According to the architects, the roof has been weathertight since mid-August 2014. Construction of the interior is also believed to be forging ahead – the so-called White Skin and the reflector have been mounted on the ceiling in the main hall and part of the scaffolding has been taken down.

"Now, for the first time, it is possible to appreciate the exceptional architecture of the concert hall," said Herzog & de Meuron in a statement on its website.