Galvanised steel panels create fuss-free facades for the blocks of this Stockholm housing complex by Joliark, concealing all gutters and tidying away window frames.

Located in Mariehäll, a neighbourhood to the west of the city, the Tappen residential complex is made up of two blocks that have been positioned at angles to one another to frame a triangular courtyard. 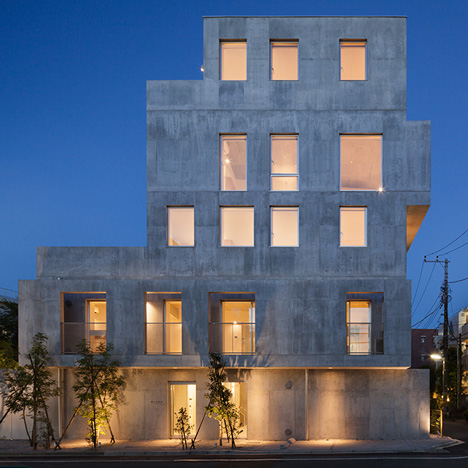 Led by architect Per Johanson, Swedish studio Joliark chose to clad the exteriors of both blocks in a protective layer of galvanised steel. This allowed services such as drainage to be tucked behind the facade, creating a flush finish.

"A driving force in the design process has been the preservation of a pure and simple material expression," said the design team in a statement. "The facade wraps around the structure like a protective cloak – an image emphasised by flush precision detailing."

In contrast with the shimmering surface of silvery metal, the larger of the two blocks features a series of concrete-framed balcony modules on its western facade, which have been infilled with timber cladding.

All of these modules are two storeys high, so each one frames an individual maisonette. This prompted the design team to describe the building as a "doll's house".

"As a metaphor, the doll's house relates particularly well to the legibility of the buildings, the internal arrangement manifesting itself clearly to the passer-by as the balconies define the scope of each dwelling," they said.

There are 44 residences in total across the two blocks – 23 two-storey maisonettes are in the first, while the second contains a further seven, alongside 14 single-storey apartments.

A glazed staircase tower sits between the two buildings, providing the main entranceway to every home.

There are also two smaller stairwells at the southern end of the site that primarily serve as fire escape routes.

There are no internal corridors, so external balconies span the courtyard elevations of the buildings. In each residence, the kitchen sits on this side of the home to encourage neighbours to chat to each other.

"Strategically positioned between the garden and the kitchen, these access terraces become a natural place for social interaction," said the team.

To keep bedrooms more private, they are located upstairs in the maisonettes and on the north side of the apartments.

The concrete fins that frame the balcony modules continue inside the residences as internal walls. The concrete is left exposed, so timber flooring was introduced to offer warmth.

Stone window ledges continue down to the floor, where underfloor heating is integrated.

Photography is by Joliark/Torjus Dahl.