Cologne 2015: Milan studio Skrivo has collaborated with Danish brand Soft Line to design a chair with a backrest that is inserted into the seat like a wafer in an ice cream.

The Halo chair's bulbous seat sits on a bent steel pipe base, elevating it slightly from the floor, while its rectangular backrest slots into a groove. 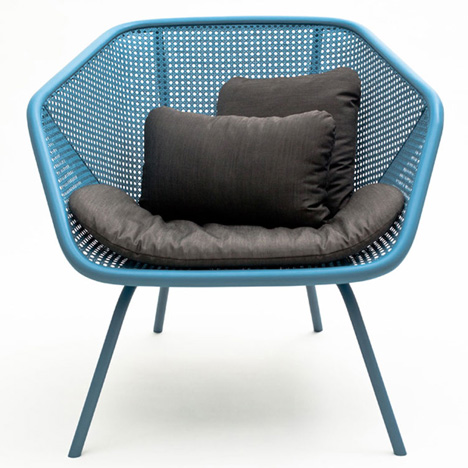 "Usually a sofa has a backrest that goes to the ground and a seat," Skrivo founder Stefan Krivokapic told Dezeen. "We thought it might be interesting to simply deepen the seat and wedge in the backrest."

The system is named Halo because the designer saw more of a resemblance to a crown of light.

The seat cushion and flat backrest are separate, enabling reconfigurations into a public seating system and a three-seat sofa.

"At airports people always try to avoid siting right next to a stranger, so a three seater will usually only be occupied by two people," said the designer. "I thought that it could be interesting to share the space but also have a bit of privacy."

The sofa version combines the larger backrest with one wider seat. The long, high backrest is designed to provide privacy, improve acoustics and enable the seat to be used to zone areas in the same way as a room divider.

"We saw a growing trend of furniture that would give the user more privacy but they tend to isolate the person from the surrounding environment," said Krivokapic.

"We tried to think of a halfway point that would allow the user to have more privacy but still be able to interact with their surroundings."

Skrivo's Halo system for Soft Line, which is available is a range of colours, was exhibited at both the imm Cologne and Maison&Objet trade fairs earlier this month.

Croatian-Irish product designer Stefan Krivokapic founded Skrivo in 2011. Previous projects include a chair featuring layers of thin cushions based on children's story The Princess and the Pea, and a traditionally caned chair with a contemporary steam-bent angular frame for Italian brand Miniforms.