Raw concrete and timber boxes create rooms inside these gabled blocks, added to a hotel on a vineyard in rural Portugal by architect and set designer João Mendes Ribeiro (+ slideshow).

The white pitched-roofed blocks are modelled on traditional Portuguese farm buildings, but are instead made from cast concrete. 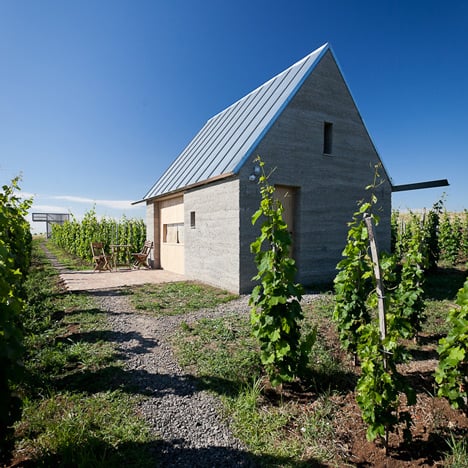 They were designed by João Mendes Ribeiro to house extra bedrooms and a concrete-lined spa for the Torre De Palma Wine Hotel in Portugal's Portalegre district.

The vineyard hotel, where guests come to taste locally produced wine, also makes use of an existing farmhouse and a cluster of renovated out buildings that sit on the plot of farmland.

Ribeiro tried to retain the character of the existing buildings, which feature white rendered walls and terracotta roof tiles, so he only made minor structural adjustments to the interior. Roof surfaces and cladding were also replaced where absolutely necessary.

The architect then added a set of new cast-concrete buildings that mimic the form of the existing architecture, replacing structures in too bad a condition to be saved.

These new building each have a cast-concrete structure, masonry walls and concrete slab roofs that differentiate them from their historical tiled-roofed neighbours.

Inside, simple concrete and timber additions subdivide and furnish the spaces. In a spa area, the white ceiling struts are left exposed, and a concrete changing cubicle sits to one end of a blue-tiled pool.

The linear blocks skirt the edge of a yard paved with stabilised clay. A walkway made from white marble cobblestones from the Alentejo region runs around its perimeter.

The farmland around the complex was landscaped by the architect to include a vineyard by a historic levada – a traditional irrigation trench – and a new swimming pool.

An olive grove, orchard, and a kitchen garden planted with beds of vegetables and herbs provide fresh produce for the hotel restaurant, which is located in an older building with ochre paintwork and a white turreted tower.

A new meadow that stretches out by a row of stables completes the series of alterations to the landscape.