A black box looms over the rusty steel facade of this complex of artists' studios and apartments, created by architecture studio Featherstone Young on the former site of a board-game factory in north London (+ slideshow).

The 450-square-metre building sits on a narrow mews in Stoke Newington – a stone's throw away from Dezeen's offices – and is the former home of board game and card manufacturer Waddington Games. 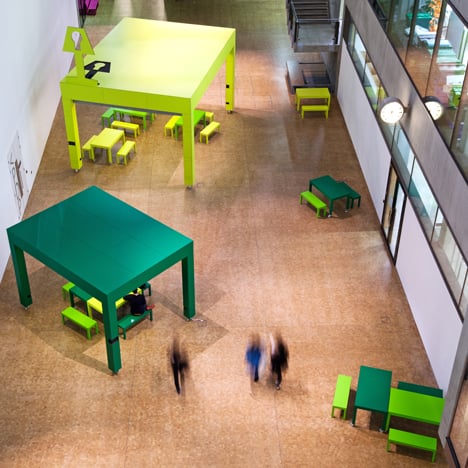 The site is tightly bracketed on one side by townhouses and on the other by industrial units, and as a result several plans by other firms to develop the plot have been denied over the years.

Artists' studios sit behind pre-rusted Corten steel panels, directing activity towards the street side of the building, while a courtyard house and two apartments occupy the more secluded and overlooked space to the rear.

"The challenge presented by the site was how to respect the neighbouring residential amenity and address issues of severe overlooking at the rear," explained the architects, "as well as capture the spirit of the area and marry the aesthetic mix of industrial and residential."

Small holes punched out of the Corten steel sheets create a subtle swirling pattern like the ones used on the back of playing cards.

"This pattern is an imprint designed on the graphic designs on the back of the Waddington Games playing cards – a nod to the previous use of the site," said the architects.

The Corten panels pivot away from glazing set into a concrete-framed structure behind, varying the degree of natural light inside the double-height artists' studios. When the panels are closed, the studio lights shine through the perforations to accentuate the pattern.

A black "hoisting box" projects out from the upper floor, allowing artists to transport larger items from the street to the high-level studios via a pulley system.

Behind the studios, a single-storey house wraps around a courtyard. The structure has a planted saw-tooth roof that accommodates clerestory windows, maximising the light available for the landlocked site.

Half gable-shaped windows provide insular views to prevent overlooking neighbours. Inside, the space is lined with warm-toned wood, while dark-grey metal details create a visual tie with the industrial-style facade.

Leafy pot plants are dotted around the adjoining patio.

The two single-storey apartments occupy a slice of space between the studios and the neighbouring residencies. They share an entrance with the courtyard house, and each has its own terrace.