Fashion studio The Unseen will present a sculptural jacket that changes colour depending on the wearer's mood during this month's London Fashion Week.

The Unseen's garment is able to translate human magnetism into visible colour patterns and was designed as part of a project called The Eighth Sense. 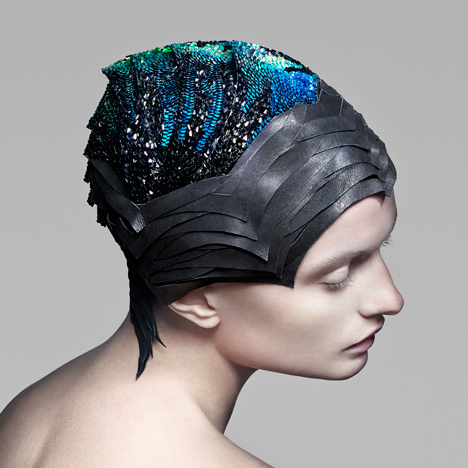 Chameleonic gemstones map brain activity across headdress by The Unseen

The studio's founder, alchemist Lauren Bowker, collaborated with technology agency Holition on the project, which aims to bring a physical manifestation to digital data.

A flexible ceramic material used to form the scaly garment is infused with Bowker's signature chameleonic ink, which changes colour via electrical conductivity.

"The concept began by the desire to visualise unseen connections between humans and how they can drain or enthuse one another," Bowker told Dezeen. "Personally for myself the hunger to create a way to monitor my own pain levels and conditions within my body, and a human-led aesthetic and analytically sound way drove the need to create this textile."

Once the jacket is put on, an electroencephalography (EEG) brainwave monitor is placed over the wearer's forehead and temporal lobes. The EEG headset reads the electrical impulses resulting from ionic current flows within the neurons of the brain.

The monitor captures the levels of electromagnetic energy given off by the wearer. This data is then wirelessly transferred into electrical wavelengths using an app created by Holition, which converts the signals into four colour combinations.

Small electrical currents are then conducted across the garment to present the various colours that each represent a different mood or emotion.

The four colours each have four tones within them, creating the ability to mix different shades and rainbow effects.

The Eighth Sense will be presented during London Fashion Week, for which visitors can book private appointments to try on the garment and receive a live aura reading. One procedure will take place every hour between 10am and 6pm in the West Wing Alcove of Somerset House, from 20 to 24 February.

"Everyone who has interacted with the piece has shown different patterns and colours in diverse places upon the garment," said Bowker. "We are not saying it is 100 per cent accurate but instead we present a new way to visualise data in real time."

The collaboration between The Unseen and Holition began when the Innovate UK Initiative asked the technology agency to set a challenge, judge the entrants and provide expertise to develop the winner's idea.

"Bowker's winning concept was a cleverly coded couture piece, fashioned from materials respondent to real-time digital data, which could change colour remotely, thereby bringing the digital to the physical," said a statement from The Unseen.

Bowker has previously embedded her bespoke inks into a gemstone-encrusted headdress that mapped brain activity, a sculptural leather garment that responded to heat and a feathered outfit that changed colour in different climatic conditions.