Jonathan Woolf Architects used chiselled limestone to construct this family home near Nairobi, which is built into a hillside and topped by a heavy sloping roof (+ slideshow).

London-based Jonathan Woolf Architects designed Lost Villa as a home for 11 inhabitants in a forest outside Kenya's capital city. 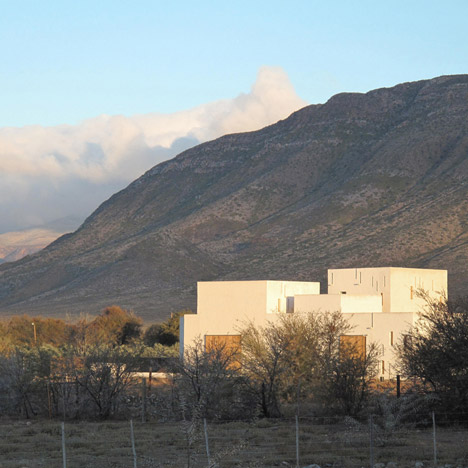 It comprises three blocks that cluster around a cloistered courtyard, forming separate but linked spaces for immediate family, grandparents and household staff.

A softly sloping roof binds the three buildings together and an opening in the supporting wall leads into the walled courtyard.

Limestone blocks were hand-cut and distressed to give the walls the appearance of ruins.

One two-storey block situated on the lowest part of the site is oriented to take in views across the forest valley, with family bedrooms and a living room on the upper floor and a guest suite below.

"We began by thinking of the ideal building in the landscape being a pavilion with orientation in all four directions," Woolf told Dezeen.

"We placed that on the site with the best view of the valley and filled it with different living rooms and then added a second 'pavilion' for the bedrooms."

The overhanging roof provides shade from the sun and protection against the monsoon rains. Residents can walk over its gently sloping surface – it was intended as a place to promenade and obtain better views of the scenery.

"The walls are like a found ruin, into which is imbedded a concrete slab, itself like the co-opted remains of some abandoned highway project," explained Woolf. "Its projection defines the inhabitable spaces and acts as a large floor in the tree canopy of the Gigiri forest."

Dormer windows project from the surface of the roof to bring light into the white painted spaces within. Shallow steps link some rooms, which are staggered to accommodate the sloping plot.

Two of the three blocks are single-storey, minimising the impact on the terrain, while the third is a chunky two-storey structure that occupies the foot of the site.

Carved dark wooden doors, collected by the clients from travels in India and Africa, are incorporated into the interior.

"These add to the narrative of the building itself as a found antique object – the artefacts seemingly from the original construction," said the architect.

Solar panels generate electricity for the building, while rainwater is harvested in tanks beneath the courtyard.

Photography is by Jerry Riley, James Muriuki and Jonathan Woolf.