Design Indaba 2015: designer Kathryn Fleming has presented prototypes for new organisms that could be created using synthetic biology, including a cat-dog hybrid with reflective fur and a tightrope-walking herbivore.

Fleming's work aims to express the potential of synthetic biology as a method of conserving characteristics found in endangered animal species. 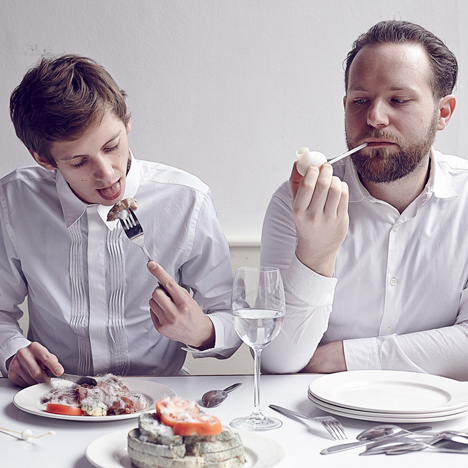 "I want to evolve animals to live in the world that we're making, as opposed to trying to preserve animals in the form they exist right now," she told Dezeen at the Design Indaba conference last month, where she presented the project.

"This century has been hailed as the 'biotech century' in which we will replace industrial technology with biological technology," said Fleming. "However, it is simultaneously a century of mass extinctions where it is projected that half of the 9 million known species on earth will disappear by the end of the century."

To prevent losing characteristics and adaptations in animals that may become extinct, Fleming proposes engineering them into other species in combinations – creating hybrid creatures that might have a better chance of survival.

New organisms suggested by Fleming as examples of this conservation method include a beaked porcupine that lays eggs, a six-legged carnivore with retro-reflective skin, and a herbivore that has a giant set of antlers and the ability to tightrope walk.

"Each creature that I created is a living archive of adaptations from a variety of related species, which may go extinct within the next 100 years," said the designer, who has used a combination of taxidermy and model making to show what these creatures and their environments might look like.

An arboreal porcupine would inhabit the fictional topiaboo tree and be covered in red-purple spines to blend in with the pom-pom-like foliage.

Its sharp beak would be used to prune the trees, strip bark for building nests and dig to harvest ant pupae.

This bird-like adaption would incorporate special cells that enable the creature to detect ant colonies using "electrolocation" to pick up energy pulses.

The animal would also lay eggs, but newborns would be armed with a small tooth for breaking their way out of the shells.

Another possible creature is the Superbivore, which would be adapted to be dextrous enough to graze along metal wires strung between rock formations.

Part mountain goat, part giraffe and part deer, the plant eater would have cloven hoofs that it could spread to keep grip when traversing precarious terrain or man-installed tightropes.

Measuring 25 centimetres, its tongue would help it to grasp foliage and aid grooming. Giant cranial appendages would be a combination of antlers, horns, pronghorns and ossicones – the protuberances found on the heads of animals like giraffes.

Finally, a six-legged cross between a cat and a dog would have retro-reflective fur – which bounces light back in the direction it came from – to dazzle its prey.

Lines of muscles along its back would allow it to ripple its skin in undulating waves and create patterns with its reflective fur.

The Retro-reflective Carnivore would also have lengthened saber-tooth-like fangs and non-retractable claws.

"These proposals are speculative, but their forms, functions and behaviours are all possible and are based on evolutionary precedent and scientific research," said Fleming.

All of these new species would inhabit their own specialised habitats in extended sections of London Zoo in Regents Park.

"Rather than preserving animals as artefacts of a wilderness that no longer exists, perhaps we need to evolve them to live in the world we are creating," said Fleming. "What if we redesigned the zoological park to re-enforce and celebrate the evolutionary potential of animals?"

Other synthetic biology proposals that have recently emerged include an idea to modify the human body so it can consume and digest rotten food, and research into how fungi could be harnessed to create new sustainable materials.