A school that was destroyed during the 2010 Chile earthquake has been rebuilt by Santiago studio LAND Arquitectos using simple white-painted pine (+ slideshow).

The Santa Rosa School in Constitucion, a city on Chile's south central coastline, was ruined by the major earthquake that struck on 27 February 2010 – one of the most powerful quakes on record. The tremor measured 8.8 on the Richter scale and triggered a devastating tsunami. 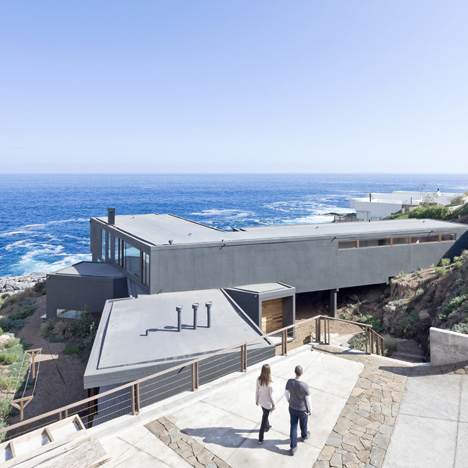 The school lost 50 per cent of its facilities in the disaster and required significant reconstruction, so the city approached LAND Arquitectos, initially to design emergency classrooms, and then – once funding was secured – to rebuild and extend the school, adding a chapel.

The architects collaborated with local non-profit organisations and private sector companies on the project, with the aim to create a functional teaching facility that could also serve as a positive symbol of the city's recovery from the disaster.

"These permanent solutions where conceived in a way that would not only rebuild the school, but build a better urban piece for the destroyed city," said the team.

"We asked ourselves: How can we contribute to the reconstruction of the city by re-building a piece of the urban fabric? In addition, how can we build an environment that would improve teaching and learning performance?" they added.

Their response was to include a public plaza and a new chapel in their design, offering a tribute to the victims of the earthquake. The chapel features an asymmetric roof that makes it the tallest building on the site.

"This sculptural element was inspired by typical local rock formations seen along the coast of this city," explained the architects.

Elements of the existing building were refurbished and incorporated into the project, while new timber-clad structures with tall narrow windows create a new reception area, kindergarten and playgroup facilities, as well as computer suites and dining areas.

The new school buildings were constructed using a prefabricated system of structural insulated panels (SIPs) – a type of composite material that allowed for a quick building time, low construction and labour costs, and minimal impact on the fragile terrain.

All of the structures are clad in planks of pine, which were painted with just a layer of white primer to allow the grey-toned wood to be gradually revealed as the building ages.

"We used local pine wood as the main material for the project and furnishings, promoting and encouraging the use of wood in the reconstruction of the city," said the architects.

"We wanted to rebuild the city's identity using materials that are locally accessible and easily replicable building techniques."

A narrow patio covered with grey flagstones and with integrated seating provides a public area adjacent to the chapel and school entrance. Additional patios at the rear are used as playgrounds, for outdoor dining and as a public carpark.