French designer Christophe Pillet has created the first store for a new fragrance brand on Paris' prestigious Rue Saint-Honoré, with a royal blue and marble interior and modular fittings (+ slideshow).

Product and interior designer Pillet was invited by the founders of Ex Nihilo to create their first store with a design that would offer flexibility and set the tone for the perfume house's future retail outlets.

The flagship at 352 Rue Saint-Honoré, which features a wall of modular shelving and steel worktables suspended from the ceiling, opened in December 2013 and has now been partially replicated in a small concession at London department store Harrods. 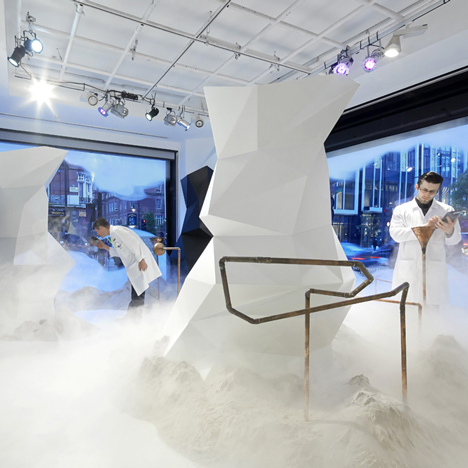 Selfridges' Fragrance Lab attempts to distill your character into a scent

"Perfume is the scene of the moment. In the last year, there were 300 new launches of niche perfumes," Benoît Verdier told Dezeen.

"Luxury brands want to be niche to be cool, and niche brands want to be luxury to make money," he continued. "So the idea was OK, we are not niche, but we are a new fragrance brand – Ex Nihilo in Latin means created from scratch. The idea and the challenge was to be very credible and legitimate."

Pillet said the trio were looking for a designer who "lacked a bit of maturity" so that the space would not feel old-fashioned.

"Even new perfume companies and new brands, they are very formatted, related to an old fashioned form of Classicism," Pillet told Dezeen. "They wanted Ex Nihilo to be classic, meaning not being trendy of the moment. But they also wanted to appear like a young, fresh, start-up. So this was those two lemons together. That was interesting to translate."

The Paris store is arranged over two floors, behind a glazed shop front framed in steel. A strip of Greek marble across the front features the brand's logo, and the same marble is used for plinths and accents throughout the interior.

Inside, the ground floor is dedicated to showcasing the brand's fragrances. This includes the shop's "Vase des Senteurs" – a series of scent emitters developed by Pillet specifically for Ex Nihilo that look like vases encased in blocks of transparent perspex.

A capsule at the bottom of each block contains an alcohol-free perfume sample. When a button is pressed on the front, a jet of air flushes through the capsule towards the opening at the top, delivering a shot of scent.

These will eventually be developed into stand-alone products sold by the brand, with more luxurious finishes, according to Verdier, who was previously a strategy planner for luxury brands.

"We wanted to propose a different approach to testing the fragrance, that would be non offensive, and would keep a good balance within the boutique," explained Verdier.

The devices are housed on a steel worktop structure that hangs from the ceiling on the left side of the space, with a built-in top-light that is similar to a photographer's light box.

The wall behind is fitted with wooden shelving made up of a series of differently sized boxes, which are mounted onto a frame at the back and can be rearranged to change the display.

"The wood is the classical American Walnut," said Pillet. "Very chic, long lasting, and traditional at the same time. It's like a black dress."

A second suspended table forms a counter on the other side of the store, which customers can sit at while an assistant creates bespoke fragrances.

Each fragrance in the range can be customised with additional notes. The new combinations are created on site using specialist equipment, which sits on a gold steel counter that runs along the right-hand wall.

The fittings on each wall are mounted on rails and can be moved along to create different arrangements, with glass panels that slide in front of the shelves.

"You can partition the space in different ways," explained the designer. "There was also this idea of being a bit dynamic, with doors on wheels, opening and discovering things, hiding things and paying with the space."

"The shelving and furniture is really like a technical system," added Pillet. "We have also three kinds of ingredients in our recipe, which is the marble, the metal and the wood. We can mix them and make specific treatments for shops using this system."

Matching shelving is installed in the upstairs space, which is used for private consultations and the creation of bespoke fragrances using raw materials.

Pillet said the design approach was similar to a creating an industrial workspace like a laboratory, but using domestic materials.

All of the metal used throughout the store has been finished in a pale gold colour, and the walls are painted brilliant blue to contrast with the steel, wood and marble.

The ceilings are covered with smoked mirror, to partially reflect the blue of the walls and create the impression of a larger space.

"You don't have to feel like you are stuck inside this small box," said Pillet. "It's more like furniture in a wider space."

The new Ex Nihilo concession in Harrods opened last month and features the same shelving and fittings with a layout adapted to a narrower area.

A sampling table for customising fragrances was added towards the back of the space, with the walnut shelving covering an entire wall.