Neighbouring buildings flank all four sides of this inner-city housing block in Seoul, so architecture studio Apparat-C planned the layout around the best positions for windows and balconies (+ slideshow).

Ensuring enough daylight for the penthouse wasn't a problem, but Apparat-C had to employ a variety of techniques to provide natural light and maintain privacy for the studio flats, which occupy the building's first and second floors.

"In planning the studio units, the key challenge was how to bring enough light into the units and yet maintain privacy, which may seem conflicting ideas," explained Seewoong Lee, one of the studio's three founders.

"The idea of having enough ventilation and sunlight already seems a far-fetched idea in the densely populated multi-unit and multi-family housing areas, not to mention privacy," the architect said. 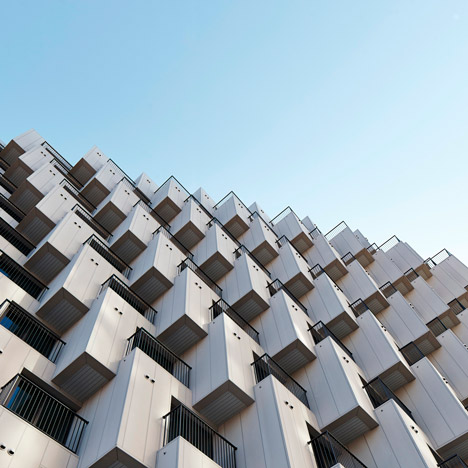 Each apartment was given a recessed balcony that extends along the front of the main living space. This allowed the windows to be pulled away from neighbouring structures.

Residents are also able to partially screen these balconies, using sliding shutters made from extruded mesh. "When looking out from the living room, the metal curtain screens off the more dull view outside," said Lee.

Bathroom windows also face the balconies, rather than outwards towards other residences. "Often in densely populated areas, the bathroom windows are dysfunctional because they cannot be opened due to privacy," added the architect.

A single staircase provides the entrance route to all seven homes. It sits at the building's northern end – the darkest corner – as this spot was deemed least suitable for apartments.

It finishes at the entrance to the penthouse, which takes up the two uppermost floors. This residence contains living, dining and kitchen spaces on the second floor, and a bedroom and bathroom on the level above.

A reduced floor size on these two storeys creates a generous roof terrace, but also gives the building an angular profile that prompted the name White Cone House.

This is emphasised by the choice of white panels for the exterior – a type of cladding known as exterior insulation finishing system (EIFS). Semi-transparent corrugated polycarbonate was used for the roof.

Parking spaces are slotted underneath the building at ground-floor level, where there is also a small office unit.

Seewoong Lee founded Apparat-C alongside partners Yeonyung Choi and Pedro Ferreira. Their first completed project was a house with a zigzagging roof, and White Cone House is their second.

Photography is by Namsun Lee.