The sloping roofline of an old extension to a London residence is surrounded by the pale brickwork of its replacement, designed by local studio Tsuruta Architects (+ slideshow).

Tsuruta Architects refurbished and extended the end-of-terrace family home in south London, integrating the wall of its formerly mono-pitched rear into a new rectilinear extension.

Named House of Trace, the design was intended to reveal "memories of place and construction".

"Our intent was to keep a sense of memory, while simultaneously allowing the new intervention to have its own identity," said the architects. "As we uncovered the original building fabric, we discovered the history of the house."

The architects gutted the existing extension but retained part of the external wall and built the new two-storey structure around it. Contrasting brickwork was used to distinguish between the old and new parts of the building.

The metal beams used to support the extension were left exposed and large sections of glazing set within the framework, while the previous window opening was filled with pale brick.

"The original extension had no distinct historical or architectural value, and was structurally unsound, but it had a roof profile typical of those found in terrace house back gardens," they added. 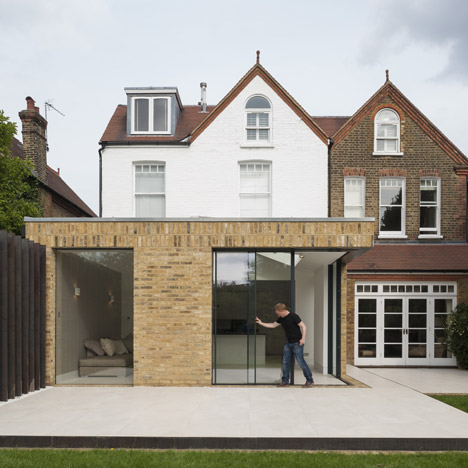 "We chose to incorporate this banality in the new face of the rear garden – in a way fossilising and persevering its charm to carry some sense of associated memory to those who know it or those who see it new."

The architects reshuffled the interior layout, relocating the bathroom and kitchen from behind the rear elevation to the centre of the house, and then replacing them with a dining room and master bedroom to take advantage of the garden views.

A galley kitchen is situated in a passageway between the dining room and lounge, which is set at the front of the property.

A new timber staircase by the lounge leads to the master bedroom at the rear of the house, as well as to a children's room and a third bedroom situated over the lounge, facing the street.

To reintroduce natural light into the core of the house, the architects also added a two-storey lightwell, which is overlooked by internal windows in the master and children's bedrooms.

The upper storey of the well is completely glazed, giving views of the sky and gardens from the bedrooms, and presents as a glazed slice on the outside of the building.

Wooden shutters can be closed to conceal the master bedroom from the internal space, while a window in the building's once-exterior wall now forms an unshaded opening for the children's room.

"The lightwell serves as a focal point in the home," said the team, "connecting the family between floors as well as improving the quality of the spaces — the mother's scream 'food is ready' echoes through this passage."

The bedrooms are lined with a mixture of the old and new brickwork, plaster and timber. The bathrooms feature white tiles with cracked glazing and copper and brass fittings.

The white soffit of the new staircase steps across the ceiling of one bathroom.

"The structures of the new envelope have been exposed internally wherever practically possible, so that these surfaces will register the future stories of the house," said the architects.

"Hand marks of workmen trace the process of the work and are now recorded on the internal faces of the building's fabric."

Components of the extension were three-dimensionally modelled and prefabricated to reduce the cost of on-site construction and allow for a quicker building time.

Bespoke wooden furnishings including the dining table and chairs, beds and staircase were cut using a CNC router – a computer-controlled cutting machine – and flat-packed before being transported to the site.

Beds and benches feature bases with a concertina-formation that can be used as storage nooks, while notches on the chairs and table reveal where the pieces have been slotted together.

The furniture sports the identifying codes from this cutting and reassembly process. "The record of this CNC flatpack process can be traced to the numbering system visible on the faces of each piece," explained the studio.

Photography is by Tim Crocker, Marie-Cecile Embleton and Tsuruta Architects.