The range was designed by Norm founders Kasper Ronn and Jonas Bjerre-Poulsen for Italian bathroom manufacturer Ex.t, which aims to create products that can also be used elsewhere in the home.

Norm's Stand bathtub and basin both share a similar form.

Moulded from a lightweight, man-made material called Living Tec – a composite of aluminium oxide and polyester acrylic resin – they both have white oblong bases with straight sides to create the required depth for their different functions.

Each is supported by a cross-braced metal stand with a matte black finish, with slim rounded legs. 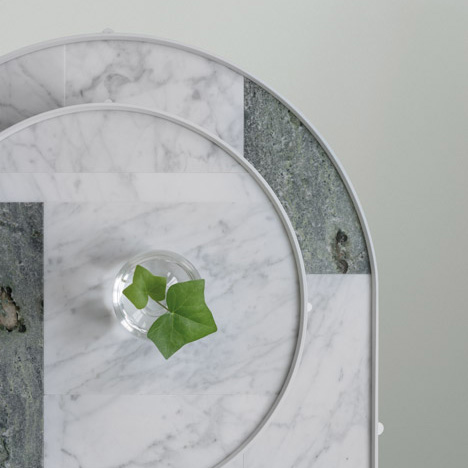 The designs were influenced by cast-iron details found on 1920s and 1930s fittings and the stands of Victorian plant pots used in winter gardens.

"In line with our minimalist philosophy, we tried to reinterpret the Modernist style of the 1920s and 30s, stripping it of its decorative excesses to reach the point where there is nothing more to add or take away in order to make the product better," said the architects.

"From the very beginning our goal was to create design objects that were beautiful and sculptural yet at the same time light and airy, in an industry sector – bathroom furnishings – that often tends to be dominated by visually heavy furnishing elements," they added.

Also in the collection for Ex.t are a modular shelving and storage system and a pendant lamp, both designed to be used in the bathroom and elsewhere in the home.

The Felt Shelf is a grid of painted metal that can be hung on the wall either vertically or horizontally. The grid creates two boxes on its longest sides and two on its shortest.

Various options can be added to the basic frame, including circular and square mirrors, shelves, and compartments with or without doors. Empty spaces in the grid can be used as racks for hanging towels or clothing.

The Hat Lamp is made from natural oak or black varnished ash, with a silk-covered wire to allow it to hang from the ceiling.

Its shape is based on old hat-making moulds, which were traditionally used to shape felt that had been softened with steam and have since become collectors items.

Other recent designs by Norm Architects include a collection of tables with mix-and-match marble tops, a showroom for a Danish design brand featuring a cluster of minimalist "houses", and a device to create the perfect foamy head on a glass of beer.