Architect David Chipperfield has attacked the way the British press reports on architecture and accused journalists of damaging the profession.

Speaking to Dezeen today, the British architect claimed that some newspapers and trade publications are "obsessed" with presenting minor issues with buildings as major setbacks.

"The unfortunate thing is the Anglo-Saxon press," he said. "It's about making headlines. We lead the world in it unfortunately."

He added that sensationalist reporting "drives a bigger wedge between the profession and society" and helped fuel government suspicion of architecture.

Chipperfield pointed to recent reports of problems with the flooring at his Città delle Culture (City of Culture) project in Milan and opposition to his Nobel Centre in Stockholm as examples of misreporting. 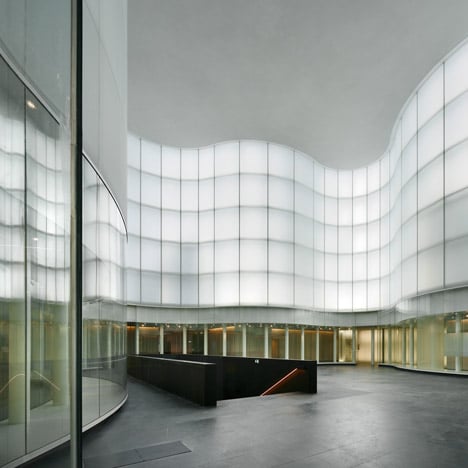 David Chipperfield disowns Milan museum over "war of the floor"

He referred to a story in the Independent newspaper yesterday, which claimed his proposed Nobel Center in Stockholm 'could be scrapped'.

Chipperfield said the story was based on criticism of the project that was part of the normal consultation process.

"The headline in The Independent is just shocking," he said. "'Nobel Center could be scrapped' because of a letter? I mean it's just a letter sent during a consultation process where every institution in the city is encouraged to write their opinion. It's democracy. One letter does not mean a building doesn't happen."

Chipperfield said his client in Stockholm was bemused by the story, which was picked up by other publications.

"The people in Stockholm are calling us up all the time saying 'Why are the British press so obsessed with this?'" he said. "They are quite surprised. They don't see it as a story."

Chipperfield also criticised another report in the Independent last week that claimed he had "hit the roof" over issues with the flooring at the Città delle Culture, which opens in Milan later this month.

"I did a press conference in Milan, it was fairly reported in the Italian press and I came out of it very well," he said."And in the English press they were trying to make out that I was overpaid and having a tantrum."

He added: "I didn't have a tantrum and I didn't walk off the project. However the English press is not interested in that. And now there are pieces out there which say that I am difficult, I had a tantrum. It's quite shocking and the thing is that you can't remove it."

However the architect praised Dezeen's coverage of the story, saying: "I compliment Dezeen because you did a much bigger piece. You obviously got a copy of my press statement and you gave us much fairer press on it."

61-year-old Chipperfield is one of Britain's most successful architects and has won both the RIBA Stirling Prize and the Royal Gold Medal - the two highest accolades in British architecture.

However most of his work has been overseas. Last year he told Dezeen that "the UK is not an easy place to do architecture".

Speaking today, he said the attitude of the British press damaged architecture’s relationship with both the public and politicians.

"You can see why we have so little respect," he said. "It just drives a bigger wedge between the profession and society. It gives people like [former education secretary and vocal critic of architecture] Michael Gove the justification for making the sort of attacks he does on architects."

Additional reporting is by Amy Frearson.