"We expanded the line into new configurations and new models, as well as new shapes that deviate away from the sphere," the Cypriot-born designer told Dezeen.

The five new designs in the Mobile Chandelier series use curved metal elements to support the illuminated balls, as an alternative to the straight sections used for the first five designs launched in 2008 and 2011.

"It's a diversion from the linear language that's already in the collection," Anastassiades said. "The previous models we have from one to five were quite linear."

The pieces are carefully balanced to accommodate the different sizes and weights of the glass spheres, while maintaining the ability to be moved into different configurations. 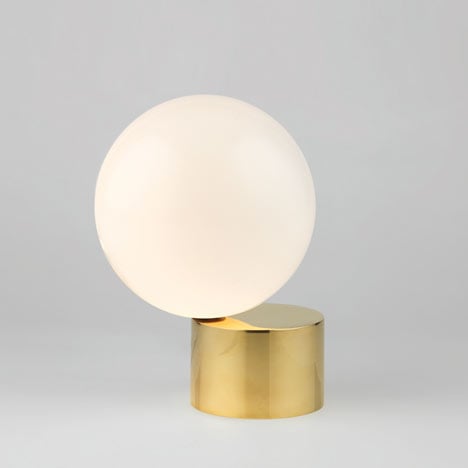 Tip of the Tongue by Michael Anastassiades

"The idea is that you also have this perfectly balanced light fixture – something in perfect equilibrium," the designer said.

The Bob lights diverge from the spherical glass forms and are shaped to look like plumb bobs – weights hung from lengths of string to create vertical reference lines – to "make a reference to perfect alignment".

The Bob family includes pendants, as well as wall- and ceiling-mounted designs, with metal parts made in nickel-plated, black-patinated or raw-polished brass.

In the Happy Together set, vertical rods in brass, nickel or black-patinated finishes carry groups of glass globes. These are arranged as pyramids or like bunches of grapes.

"The idea is almost like an exercise in some sort of mathematical sequence, exploring how you position these things together," said Anastassiades. "It's quite a playful way to address light."

The designer has also referenced Carl Jacob Jucker and Wilhelm Wagenfeld's 1924 MT8 lamp – known as the Bauhaus lamp – with a series of table lights.

Using a similar sphere with its bottom cut off as a diffuser, Anastassiades created three new bases that support the lamp closer to the table surface.

"I've borrowed the sphere and I've tried to represent the sphere in different configurations, with metal brackets that seem to simply support these elements," he said.