Dutch design firm OMA has been appointed to design a new hotel for the huge Amsterdam RAI exhibition and events complex.

Located south of the Dutch capital's centre in the Zuidas business district, the 650-room RAI Hotel will be the biggest in the Netherlands.

The 91-metre-tall design by Rem Koolhaas' firm appears like three triangular glazed boxes that have been arranged at different angles in a stack around a cylindrical glass core.

It is intended to reflect the architectural style of the existing structures of the RAI, which include the 1961 Europahal by architect Alexander Bodon and an accompanying advertising pillar, which displays three-sides signs around a concrete column. Both were awarded national heritage status earlier this year. 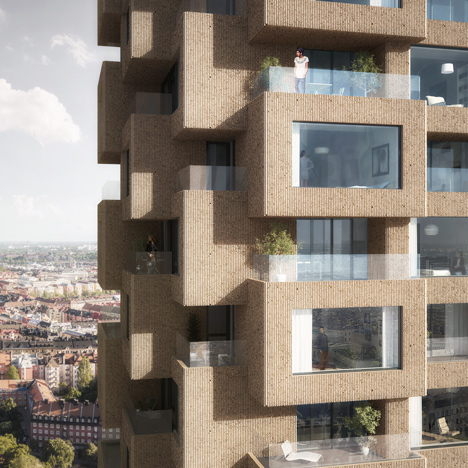 "Since the rise of Zuidas, Amsterdam RAI needed a 'new' urban look," said OMA partner Reinier de Graaf. "The prominent advertising pillar 'the Signaal' provided inspiration for the new Nhow Amsterdam RAI hotel and context for the extension of Amsterdam RAI itself."

The 25-storey design occupies a site off the corner of the RAI, and includes a gallery, a restaurant and a bar, as well as a spa and a sculpture garden. A television studio will occupy the top floor, and the building has been called On Air in reference to this broadcasting facility.

OMA entered a competition for the scheme as part of a consortium led by developers COD and Being Development, and including NH Hotel Group. It was selected by the City of Amsterdam and Amsterdam RAI over 10 other proposals.

"The winning concept of OMA stood out because of the additional special facilities," said a statement published on the city's website. "Above all, the iconic design of the building was decisive."

Construction is due to begin on the hotel in mid-2016.

Although the hotel will operate as an independent business, it forms a key part of a wider development plan drawn up for the area in 2011.

"This hotel will be the centre for event planners, exhibitors and visitors of large, multi-day international events," said RAI general director Hans Bakker.

"Thanks to the iconic design of OMA and the 24-hour experience, the Nhow RAI creates greater value to the RAI complex and makes the location Amsterdam RAI more attractive. Therefore we are able to strengthen our competitiveness in the international fairs and convention market and thus further enhance our spin-off towards the city of Amsterdam."