Three products currently make up the range, including a self-watering shelving system named One, a houseplant tray with a self-releasing reservoir called Tableau, and a water-recycling biotope titled Jar.

Designed to automatically feed the plants on three separate shelves, Pikaplant One releases water from a transparent tank that sits on top of the unit, feeding the plants when needed.

Monitored automatically by a wet-dry cycle, the process is controlled by a single-valve system.

"This analogue system integrates a humidity sensor and actuator – when a shelf contains a certain amount of water, it blocks the water flow," said designer Daniel Sutjahjo, who cofounded Pikaplant with Joost van Uden. 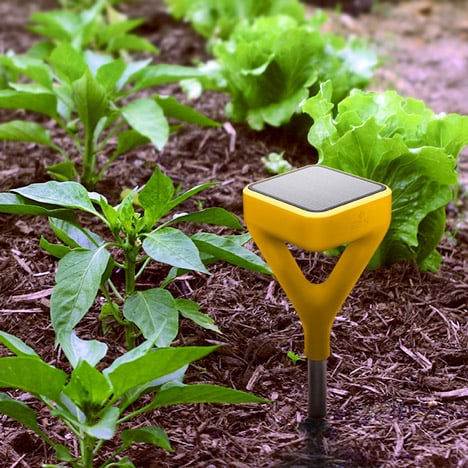 Yves Behar moves towards the connected garden with Edyn

"When your plants have absorbed all of the water and the shelf has been dry for a few days, the valve opens and water flows down into the shelf again," he added.

Reminiscent of a terrarium, the Pikaplant Jar seals plants within an airtight glass vessel with the nutrients they require in order to survive.

Hand-selected for their adaptable nature, the plants create and recycle their own water supply within the biotope. They never have to be watered and can last up to a year.

The jars currently come with a Coffee Arabica, but the designers are currently experimenting with other plants in hopes of extending the range by the end of this year.

Tableau is the third and most recent Pikaplant product. Using no electricity, the felt-bottomed tray works by dispensing around half a litre of water from a small tank when needed.

"A valve closes when you lift the reservoir, and opens when you place the reservoir on the base," said Sutjahjo. "You just need to make sure there's water in the reservoir and your plants will drink the water they need."

The brand worked with a glassblower to create the transparent vat, which is placed next to the plants on the tray. Herbs, flowers and crops can all be grown using the Tableau system, with enough room to accommodate up to four plants.

Sutjahjo and Van Uden launched Tableau on crowdfunding platform Kickstarter with a goal of €80,000 (£60,000) to produce and distribute the products.

The systems were presented in Milan's Tortona district during the city's design week last month.