David Chipperfield has today unveiled his plans to reconfigure and renovate the Royal Academy of Arts in London, which will include building a bridge between two historic buildings.

Described by the London-based architect as "a series of subtle interventions", the development will include connecting Burlington House, the grand Palladian house used by the Royal Academy since the mid-19th century, and 6 Burlington Gardens, a former University of London building purchased by the art institution in 2001.

The interiors of both buildings will be reworked to provide a direct route between the two entrances, while galleries will be expanded, a new auditorium and a learning centre will be created, and the art school will be given a more prominent presence.

"The project is an architectural solution embedded in the place itself, a series of subtle interventions which will add up to something very different," explained Chipperfield, whose previous projects includes the renovation of Berlin's Neues Museum.

"It's a small amount of architecture for a profound result," he added. 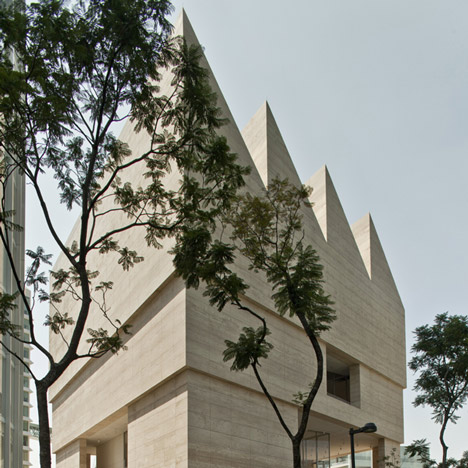 The contemporary bridge will extend across the courtyard that runs between the two buildings. It will mediate between two different floor levels and two very different layouts, forming a new thoroughfare designed to make the building more welcoming.

"You would think it would be easy to just connect two building separated by a 15-metre gap, but the bricks and mortar of this building are quite simple compared to the complexity of what goes on inside," Chipperfield told journalists at the launch this morning.

"All museums have an ambition to more than just a place of showing things, but to be a place of activity, and this enables that."

Top-lit galleries for temporary exhibitions will also be added inside Burlington Gardens, within spaces that were once used as science laboratories, while the area that once housed the university lecture theatre will accommodate a new 260-seat auditorium.

The Clore Learning Centre will occupy the ground floor of Burlington Gardens alongside the RA Schools, which will be significantly expanded to give students more studios and a dedicated exhibition room.

Students will also be able to make use of the courtyard located between the two buildings, making them visible to visitors crossing the new bridge.

The project will also involve the restoration of Burlington Gardens' Neo-Classical north facade and a reworking of the entrance hall.

Charles Saumarez Smith, secretary and chief executive of the Royal Academy, said the project would transform the two buildings into a cultural campus on a par with the scale of the British Museum.

"The physical transformation of the site will fundamentally change our 247-year old institution," he said.

"We are, first and foremost, artist-led, home to a community of the world's greatest artists and architects, and a centre for the training of emerging artists, with practitioners and an art school at our heart. This is not just a major building development, it is an undertaking which will transform the psychological, as well as the physical, nature of the Academy."

David Chipperfield is the third architect to draw up designs for this redevelopment project. In 1998, Michael Hopkins & Partners won a competition to design a link between the buildings, but the project was abandoned due to a lack of funding. Colin St John Wilson also drew up a masterplan for the site in 2006, but his death the following year led to the launch of a new competition, which was eventually won by Chipperfield.

The project will receive £12.7 million in funding from the Heritage Lottery Fund, as well as support from private donations. An additional £5 million still needs to be found.