A glazed corridor connects the four house-shaped buildings that make up this holiday home on the outskirts of Porto, designed by young Portuguese studio PROD (+ slideshow).

Aptly named House of Four Houses, the residence comprises a series of similar blocks that have been clustered together on a site located on the side of a valley, offering impressive views over the rooftops of a nearby town.

PROD founders Paulo Carvalho and Susana Correia designed the house for a family of four, which prompted the inclusion of four volumes. Although they all look the same, they differ in size and orientation and all accommodate different functions.

Three of the blocks have been arranged at right angles to one another, lining up with the glazed central corridor that connects them. The fourth structure projects out at an angle, following the alignment of a neighbouring residence.

"The proximity between the two constructions led to a desired dialogue," explained Carvalho and Correia. "The modest dimensions of the existing building determined the scale of the house, while the vernacular identity influenced its layout." 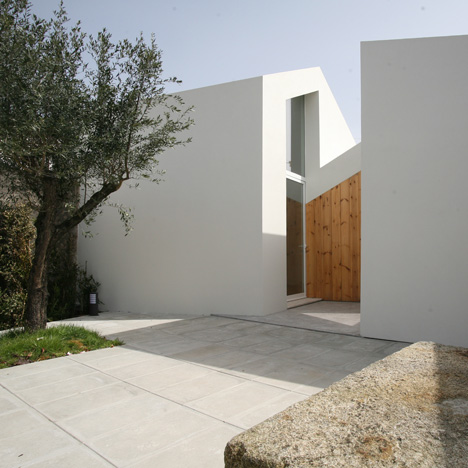 Pitched roofs give all four wings a gabled profile, while the connecting corridor has a flat glass roof that helps it blend into the background.

"The considerable dematerialisation of its limits allows it to be felt as both internal and external," said the architects. "When moving from one room to another it allows you to comfortably 'walk through the leaves'."

Patinated pine boards clad the outer walls but also continue inside the building, where they have been whitewashed. Roofing comprises zinc panels, while the house's base was constructed using locally sourced granite.

"The global coherence of the house highly depended on the material choice," said the architects. "The combination granted a rich silver homogeneity combining different tones and textures."

Although the residence only appears to have one storey, there is also a subterranean floor that accommodates car parking, a wine cellar and a laundry room.

On ground level, the southernmost block accommodates a dining room and a kitchen – both similar in size. These spaces open out to a decked terrace, as does a living room that occupies an adjacent block.

The living room is the tallest of the four volumes, which allowed the architects to create a small office on a mezzanine level. This is accessed via a staircase of cantilevered wooden treads, each with curved undersides.

This room also includes a contemporary wood-burning stove that hovers about a metre above the floor and projects through the roof to form a simple chimney.

The northernmost block accommodates all of the wet-rooms, while the fourth wing contains a pair of double bedrooms.