After almost five years in the making, architecture studio FAT and artist Grayson Perry have completed their fairytale-inspired Essex holiday home, which was designed as a shrine to the fictional character Julie Cope (+ slideshow).

"I wanted it to be very small and very rich," said Perry at the opening today, but added that "it would've looked like the set from Game of Thrones" without Holland's intervention.

While the outer structure – covered in gleaming green and white tiles and featuring a copper moulded roof – completed in August 2014, the interior was finally unveiled today. 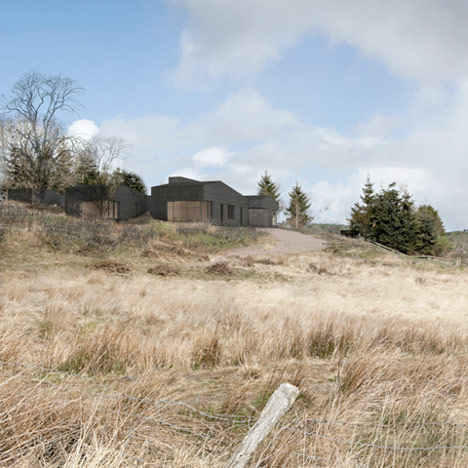 The public will be able stay inside, and short-term lets will be allotted through a ballot system open until midnight on 26 May.

The building is split into four segments that increase in scale, like a retractable telescope, as it slopes back onto the plot towards the estuary.

The copper-clad roof form is based on medieval stave churches, which feature complex roofs with multiple pitches.

Visitors approach the house through a cul-de-sac across the tracks from the local train station.

A narrow foot bridge links with a lane with grass growing between the tyre tracks – a route described by Holland and Perry as a pilgrimage.

The building sits at the end of the lane like a rural chapel in the middle of a green meadow. "It should just settle into the place and not change it," said Holland.

The design is centred around the fictional character Julie Cope, conceived by Perry as an "Essex Everywoman".

Iconography depicts Julie as a saint – from mouldings on the glossy green tiling and an aluminium weather vein on the outside of the house to tapestries and ceramic statues inside.

Behind a set of bright red double doors, an entrance hall with primary coloured paintwork leads to a kitchen with a herringbone parquet floor, followed by a chapel-like space with a tall pitched ceiling and rows of arched windows set high into the walls.

Two large tapestries depicting Julie's life, from her birth to her divorce and eventually her death, hang from the walls.

A motorbike hoisted up to the ceiling of the chapel represents a collision with a curry delivery driver, with which Julie met her end – a tombstone in the front garden marks her final resting place at 61.

A set of steps lead from the back of the house across a threshold decorated with a mosaic skull pattern onto a stretch of lawn, as well as to a pathway that trails around the edge of a field down to the shoreline of the estuary.

Off the hallway, a bathroom features white tiled walls and floors, with bright yellow grouting that matches the paintwork in the hallway.

Opposite, another door opens onto the foot of a spiral staircase made from dark wood, which leads to a bathroom and two bedrooms positioned side-by-side at the rear of the house.

Walk-in wardrobes open from the back of each room onto two interior balconies overlooking the living room. A life-size ceramic effigy of Julie stands in an uplit recess between the two.

A more elaborate bathroom with a bath tub sunken into a platform covered in muted green tiles level with a window overlooking the approach to the house.

House for Essex is the final project to be completed by the now-defunct FAT, whose members disbanded in 2014 after 23 years of practice.

It is the sixth completed home in the Living Architecture series – a project masterminded by Alain de Botton to allow members of the public to stay inside buildings by world-class contemporary architects.