The four buildings that make up this affordable housing development in Santa Monica, California, all feature mint-green solar shades on their facades, and are organised around a "starfish-shaped" courtyard (+ slideshow).

The brief called for designs that were both environmentally and economically sustainable.

A site formerly occupied by a nursing home was designated for the scheme, which comprises 33 homes contained in four three-storey buildings.

The buildings are clustered around a group of trees situated in a courtyard at the centre of the site, which the team describe as being shaped like a starfish. 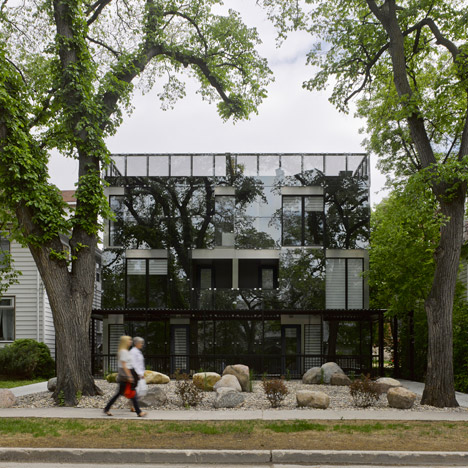 The proportions of all four structures were based on local building typologies to ensure the scheme fits well into the neighbourhood.

"We had to build consensus for the project in the community by showing that the scale was consistent with the existing urban fabric and that significant mature trees could be maintained on the site," said Kevin Daly.

"One of the biggest challenges was to develop a site plan that allowed the use of small building masses rather than the large housing blocks that are typical of this building type," he added.

The walkway extends along the edge of the central courtyard and is supported by bright yellow columns intended to echo the slender trunks of the adjacent trees.

Vertical timber battens form a balustrade that wraps around the path, as well as the staircases that connect it with the courtyard.

One facade of each building was given an expressive treatment featuring projecting green hoods that are angled to provide solar shading.

According to Daly, these higher performance details are appropriately balanced with the rest of the more understated surfaces. "That seems like a good equation for affordable housing: 75 per cent economical," said the architect.

A playground and two community rooms at the rear of the site provide a safe outdoor leisure space for children and facilities for classes or workshops alongside a community garden.

The buildings are covered with green roofs that reduce rainwater runoff, while the layout and integrated sustainable design of the units means the apartments do not require artificial cooling.