New York 2015: a new exhibition at New York's Chamber design gallery pairs an installation and furniture built from three-armed modules with a set of phallic tableware.

Titled This is Not a Duet, the show includes a room-scale installation and furniture by Chicago-based Sung Jang and a series of tabletop-sized objects by Spanish designer Gala Fernandez Montero. The exhibition's name paradoxically suggests and denies a relationship between the two new bodies of work.

Jang created a prototype for a curved tripod module, called Mobi, which was 3D printed and tested for strength and stability. He then asked a Chinese factory to produce injection-moulded plastic versions of Mobi in polypropylene.

Jang stacked thousands of the modules together to create the installation at Chamber, which has a house-like form with a pitched roof. Several half walls divide the interior into a series of rooms.

The repetition of the thin, curved module gives Mobi a presence that appears both delicate and sturdy. "I'm interested in what people perceive to be beautiful and what they don't," Jang said. "Mobi, as you build it, has elements of elegance and extravagance." 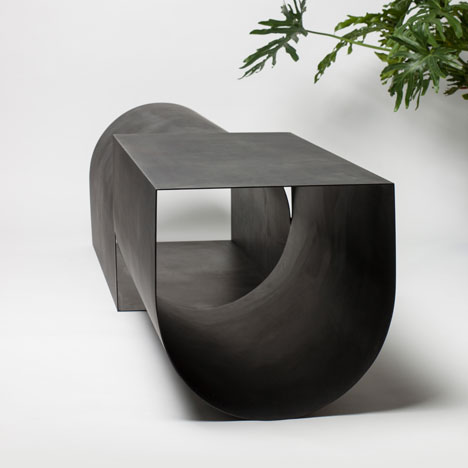 Sung also used the module to create a base for a long bench and a coffee table. The furniture was designed in response to the dimensions of the long, thin gallery space.

Montero's collection, called Caro Ettore, pays homage to the Memphis designer Ettore Sottsass. Unlike Sottsass, who often used manmade materials like laminates, Montero uses natural materials like stone and wood. "I met Sottsass as a student in Milan," said Montero. "I fell in love with him because he was so amazing."

Caro Ettore consists of two series: 16 Little Sculptures and Adult Game. The 16 Little Sculptures are stacked totems made of highly contrasting Mexican stones of different colours. "I'm working in Mexico, so I have to have a relationship to the place," Montero said. "The stones are noble materials and the locality has a richness."

Adult Game is a box filled with objects of different forms, such as tubes, circles and X shapes. The objects are intended to invite rearrangement and play, but the user must devise the rules of the game.

The exhibition, curated by Maria Cristina Didero and Juan Garcia Mosqueda, opened during this year's NYCxDesign festival earlier this month and runs until 3 July 2015 at Chamber, which is located at 515 West 23rd Street, New York.

Photography is by Antonella Tignanelli.