Bornstein Lyckefors Arkitekter has developed a conceptual house with an integrated outdoor shower, which could be built without permission thanks to a recent change in Sweden's planning rules.

As of July 2014, a planning clause brought in by politician Stefan Attefall allows a four-metre-high building with a maximum area of 25 square metres to be built on any existing residential property, providing it satisfies a series of requirements.

The resulting structures are known as Attefallshus, or Attefall houses, and are intended to densify Sweden's urban areas, easing the country's housing shortage

Since then, various architects have come up with inventive structures that demonstrate the possibilities offered by the rule – but Gothenburg-based Bornstein Lyckefors Arkitekter thought the best solution would be showing how the permitted eaves could accommodate a huge shower. 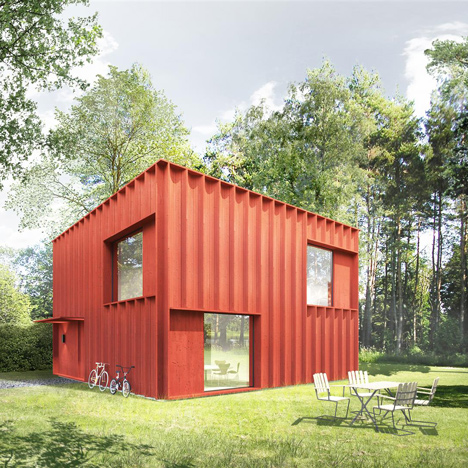 "A rule, which says that the eaves located at least three metres above the ground are allowed to protrude by one and a half metres, has enabled the building's most outstanding party – a water tank that collects roof water and enables a rain shower," explained architect Andreas Lyckefors.

"Having an outdoor shower is already a common feature on west coast Swedish houses," he told Dezeen. "It is used to rinse off salt water after an ocean bath."

This feature prompted the building's name, Waterfall House, which is also intended as a play on the term Attefall house.

The house's form is conceived as a long narrow concrete box with protruding windows on one side, while the other side features an overhanging canopy that shelters a glazed facade and a terrace.

Inside, one large open-plan room would accommodate a lounge space, a kitchen, a dining area and a study. A bunk bed would be positioned above the desk and the bathroom would be slotted into one corner.

"We wanted to explore the maximum possible impact that a building made from the new law can have, by making it long and high with extruding volumes from the facade," said Lyckefors.

"The rule of the bay window, that it may protrude half a metre without being counted in the building area, has been used to give extra space for a loft bed, a generous sofa niche and the kitchen," he added.

Lyckefors also envisions storage areas being built into the walls and room on the ceiling for a suspended kayak.

The design was created for the exhibition 25 Square at the Form/Design Center in Malmö, which shows proposals for Attefall houses by 25 different architects, including Tham & Videgård Arkitekter, White Architects and Jägnefält Milton. The show closes on 7 June.

The studio has already had some clients interested in the design and is currently working on detailed drawings.