The two developments, named City Life Residences, form the south-west and south-east corners of the 366,000-square-metre site, which was created when the historic Fiera Milano exhibition centre relocated to the outskirts of the city in 2005.

Together the developments will create over 650 homes for the new district to the north-west of the city's centre, which was masterplanned by the pair in collaboration with Japanese architect Arata Isozaki.

Other buildings planned include three towers, a shopping district and numerous parks.

The seven buildings that make up the development by London-based Hadid are arranged to form a meandering loop, framing green spaces around the perimeter and a large central courtyard. The lowest is five storeys, but heights gradually increase up to 13 storeys.

"Although great consideration has been given to the ground-floor design and morphology, the project is formally defined mainly by the roof profile and the intense urban horizon it generates," said Zaha Hadid Architects in a statement.

Each building features gently curved volumes, and all of the corners have been rounded off to ensure they are no sharp edges. The aim was for the structures to echo the topography of a park landscape. 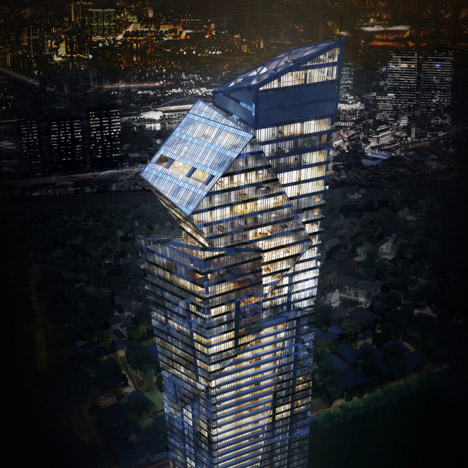 Ribbon-like balconies with glazed inserts wrap around the walls, while windows feature a variety of shapes.

"Great care has been given to site and building orientations, taking into account environmental and comfort requirements so that most apartments face south-east and at the same time allocate the best views from the terraces, towards the city or the public park," said the design team.

"The facade's design involves continuity and fluidity: the volumetric envelope of the buildings is defined by a curvilinear movement of balconies and terraces, opening up into a rich variety of private spaces, both interior and exterior, echoing the landscape below," they added.

The bright white facades were created using fibre concrete panels. Wooden panelling covers some of the walls, sections and balconies, breaking up the massing and offering some warmth and texture.

Inside, double-height lobbies were designed to create welcoming entrances for residents. Types of apartment vary from one-, two- and three-bedrooms up to two-storey penthouses.

"The residences employ the classical courtyard configuration and naturalistic materials of an historic Milanese neighbourhood, while presenting an asymmetrical layering of the facade," said Studio Libeskind.

Each of the five completed buildings is topped by a double-height penthouse. "Each of these 'sky villas' has a completely unique geometry that accentuates the tops of the buildings, integrating the large-scale structures into the rich and varied surrounding urban fabric," said the firm.

The three final buildings that make up Libeskind's development are due to be completed in 2017.

Other buildings are also underway at the City Life district include the Allianz Tower by Isozaki, which has already topped out and is due to complete later this year. Towers by Hadid and Libeskind are set to complete in the next three years.

Photography is by Edmon Leong, apart from where otherwise indicated.