Design firm Studio Drift has created an installation of thin glass bars that move like wings for an exhibition during the 2015 Venice Art Biennale (+ movie).

Installed inside an old building on the island of Murano – which is famous for its glassmaking industry – the In 20 Steps installation is part of a wider exhibition of glass artworks to coincide with the Venice Art Biennale this summer.

Forty bars of glass are arranged in pairs and suspended from the ceiling so that their brass-tipped ends meet. This connection point acts as a pivot for each of the pairs, with invisible plastic wire creating the illusion of them hanging in space.

The wires are attached to an electronic system that lengthens and shortens them to create an up and down movement. All of the pairs move at different times to each other, like wings slowly flapping.

"In 20 Steps is a tribute to the human desire to be able to fly, despite the force of gravity, and the poetry of persistence in the face of adversity," said a statement from Studio Drift. 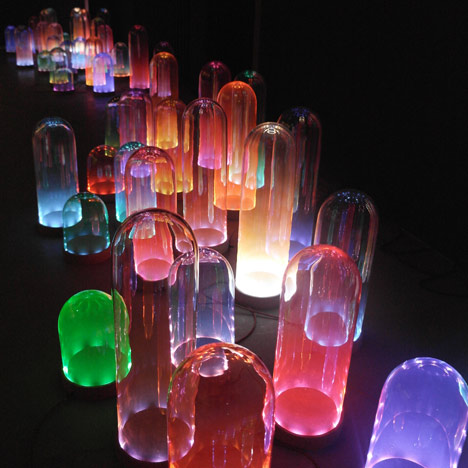 "The glass emphasises the fragility of the movement and of nature itself. Simultaneously, the moving glass breaks the natural light in the space and reflects it in moving rays."

The installation is part of Glasstress 2015 Gotika, an exhibition organised by Russia's State Hermitage Museum and glass company Berengo Studio, and is housed in the Berengo Foundation's Centre for Contemporary Art and Glass.

An official collateral event for this year's art biennale, which opened in May, the exhibition aims to explore how medieval ideas and communication methods have crept into modern thinking – despite technological advances – and the influence of the Gothic style on contemporary art.

Studio Drift focused specifically on the period between the late Medieval age and the Enlightenment in Europe.

"The focus in art and architecture moved vertically upwards, reaching for the sky and aiming at the hereafter in heaven," explained the studio.

The studio focuses on the intersection between design, art and technology. Previous projects have included a mirror made from chemical waste, plexiglass chairs with ghost-like forms inside them, and a battery-powered LED light covered in dandelion seeds.

Glasstress 2015 Gotika runs until 27 September and is split across two venues – the Berengo Centre for Contemporary Art and Glass in Campiello Della Pescheria, Murano, and Palazzo Franchetti on Campo Santo Stefano in Venice.

Movie is by Duco Volker.